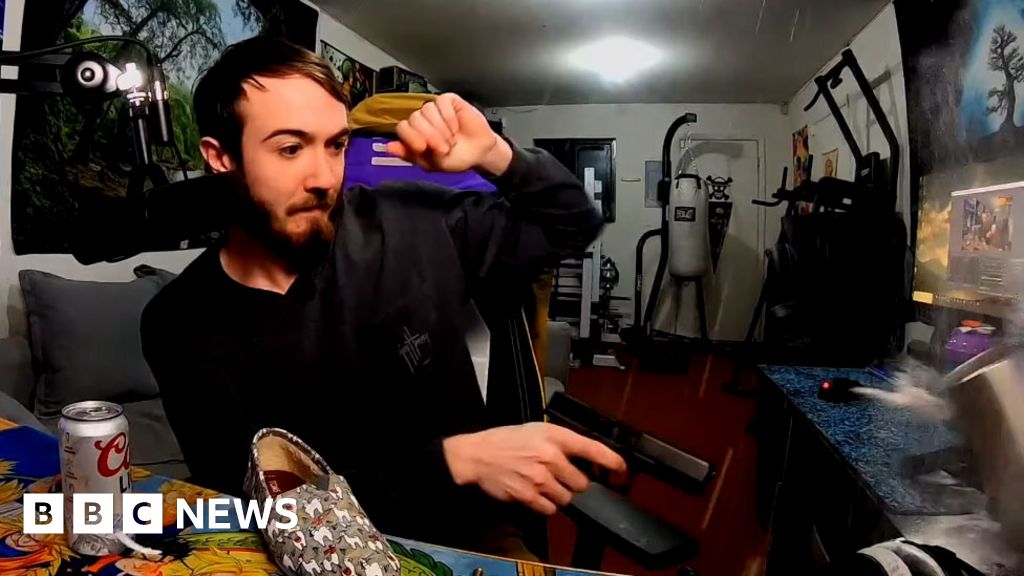 A video-game streamer has been suspended from Twitch and dropped from his e-sports team after accidentally firing a gun while broadcasting live.

Carl Reimer, a professional streamer, accidentally fired his gun while brandishing it as a joke.

Reimer said he thought he had emptied the bullets from the Glock pistol.

“I was clearly intoxicated, but the fact of the matter is… guns are not a toy. They are not to be messed with,” he said later, in a filmed apology.

Reimer is a popular personality on YouTube and Twitter, and had more than 100,000 followers on Twitch – the Amazon-owned live streaming platform – before being suspended.

In the live footage, Reimer is seen playing Call of Duty, before pausing to pretend to threaten someone with his handgun. He appeared to empty the chamber, but a bullet remained.

No-one was harmed in the incident in which the bullet tore through a metal cup, ricocheted and destroyed a computer monitor.

Shortly afterwards, Reimer’s channel on Twitch was suspended. His gaming team, SoaR, also tweeted that it had dropped him.

In an apology video posted to YouTube, Reimer said he deserved the backlash.

“It’s a mistake, but it’s a mistake that could have cost somebody their life,” he said. “I’m so broken about this.”

He said he had bought the gun for personal protection – and should not have been handling it for entertainment purposes.

“I made my biggest mistake of my entire life last night, and it could ruin my life,” he said.

“I’m not in SoaR anymore, and that is rightfully so. I hope you guys know I have no hatred toward them or anything like that… they did what they needed to do because I’m an idiot.”

Fans on his YouTube channel praised Reimer for taking responsibility for his actions.

Twitch’s community guidelines say that brandishing lethal weapons is a “zero tolerance” violation, though the guidelines centre on violent or threatening behaviour.

A suspension or ban can be devastating for a streamer’s career, in a market where regular streaming is key to retaining a loyal fan-base of subscribers.

One of the world’s most popular streamers, Ninja, said he lost 40,000 Twitch subscribers when he took a two-day break in 2018.

Like many, Reimer relies on his fan-base to make a living. He claims he had streamed every day for the past three or four years.

He told his fans he really appreciated “all the support over the years”, adding that he was “really sorry”.

“You can entertain people – without doing something so stupid,” he lamented. “It’s OK to have a gun on stream, but it’s not OK to discharge it. It’s not OK.”