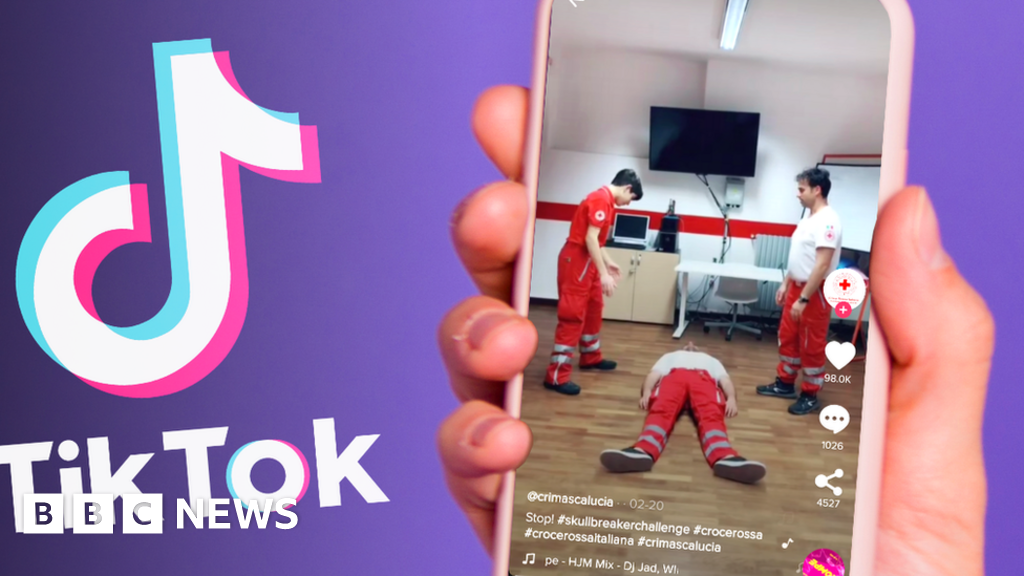 A stunt being shared on viral video platform TikTok has caused serious injury among teenagers in the UK and US.

The skull-breaker challenge involves two people kicking the legs from under a third, making them fall over.

US prosecutors have charged two youngsters with aggravated assault over the prank and warned parents to stop their children taking part.

TikTok said it would remove such content from its platform.

“In fact, it’s a violation of our community guidelines and we will continue to remove this type of content from our platform.

“Nobody wants their friends or family to get hurt filming a video or trying a stunt.

“It’s not funny – and since we remove that sort of content, it certainly won’t make you TikTok famous.”

And it told BBC News there was now text underneath #skullbreakerchallenge “reminding users to not imitate or encourage public participation in dangerous stunts and/or risky behaviour that could lead to serious injury or death”.

In February, a UK mother, whose daughter had taken part in the challenge with two friends wrote on Facebook: “Please, please if you have teenagers doing TikToks, do not let them get involved in this.

“I’m sitting in [accident and emergency] with my daughter with a severe spinal injury.”

Posted beneath the warning was a picture of her daughter taking part in the challenge alongside one of her in hospital in a neck brace.

In New Jersey, the Camden County Prosecutor’s Office said two children had been been charged with third-degree aggravated assault and third-degree endangering an injured victim after an incident involving the prank.

And prosecutor Jill S Mayer urged parents to talk to their children about potential consequences of taking part in a social media challenge.

“While the challenge may seem funny or get views on social media platforms, they can have long-lasting health consequences,” she said.

According to the Washington Post, a 13-year-old boy from Camden had been admitted to hospital after the prank.

There have also been reports of injuries related to it in Pennsylvania, Oregon, Arkansas and Alabama.

Some TikTok users have themselves started posting videos warning the prank can cause serious injury.

At the time of writing, most content being shown following a search for “skull-breaker challenge” was videos explaining the risks and urging people not to take part.