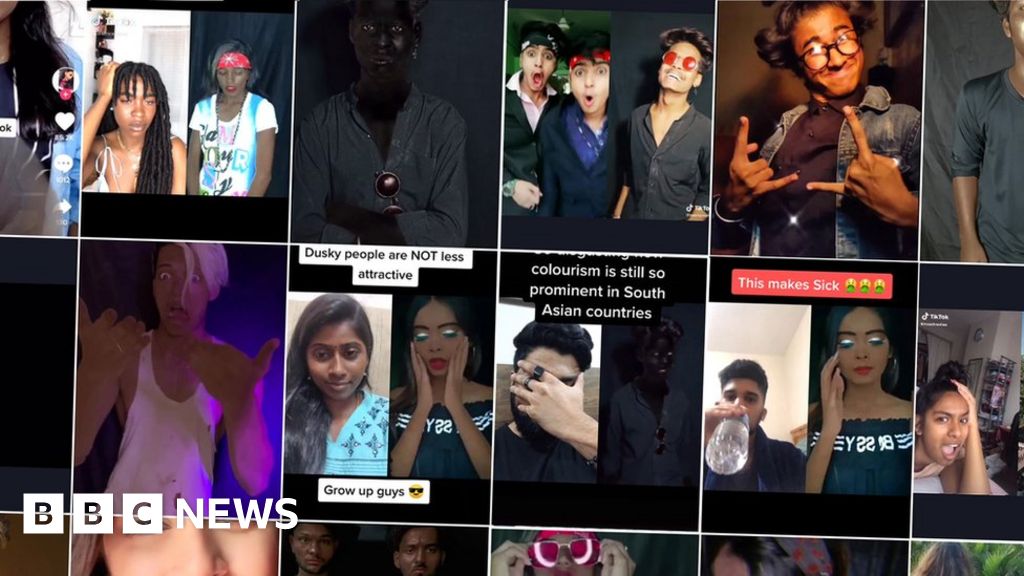 A viral TikTok trend in India has been accused of promoting colourism.

It involves users digitally darkening their skin colour and looking sad – before revealing their natural, lighter skin tone at the end and smiling.

Colourism is prejudice against people who have a darker skin tone or the preferential treatment of those who are of the same race but lighter-skinned.

A huge backlash has prompted deletions and calls for TikTok to take the videos down.

The trend, which began earlier this week, has reignited a huge debate on colourism in India and beyond.

It sees users lip-sync to a song from a Tamil film called 3, with lyrics about a “white skin girl” with a “black heart”, and gesture to their artificial skin tone.

The music has been used more than 21,000 times, with the videos receiving millions of views.

Radhika Parameswaran, a professor at Indiana University and commentator on colourism, says this trend is disconnected from the original context.

In the film, a beautiful light-skinned woman who has a “black heart” is impervious to the hero’s love. The song “did not explicitly refer to dark skin, but nevertheless Kolaveri Di’s catchy tunes and lyrics become creative fodder for these youths to stage their playful and dramatic performances of skin colour mutating from dark to light,” she said.

One user commented: “This shouldn’t be a trend. Every skin tone is beautiful no matter where you live or where you’re from. We are all equal in this world.”

Kavipriya Vimalraj, who has 350,000 followers, reacted to the video in a “duet” which has been viewed more than 215,000 times. She told the BBC: “Making this kind of video indirectly saying that lighter tone people are happier and likeable in society is not acceptable or true.”

But another user argued that “if you know Tamil this is a love song”.

User @nikhilsoni123, who created a video based on the trend, said: “Guys this video is not to hurt anyone. I truly agree colour shouldn’t matter! Colourism shouldn’t be celebrated! It was in trend so we did it.”

Since the first video in this trend went up earlier in April, some of the films have been deleted. But many more remain on the platform.

Now duet or reaction videos labelling the videos racist or colourist are flooding the site, with some overtaking the views of the original videos.

User @.ashakira commented on one reaction video that “most of them have turned off their comments because they are well aware of the backlash they’re getting”.

Some say they have reported the video but that TikTok responded by saying the videos did not violate their guidelines.

Kavitha Emmanuel, founder and director of the Dark Is Beautiful campaign, is confused by the message of these videos but hopes it will turn into a positive conversation about colourism in India. The trend “intentionally or unintentionally… is surfacing the underlying toxic belief that measures a person’s worth based on their skin colour.”

“Remarks are often seen as funny and we don’t realise how it hurts people.”

TikTok’s community guidelines say users should not post “content that dehumanises or incites violence or hatred against individuals or groups”.

TikTok users around the world have been reacting to the trend.

Javier Felipe is Colombian and lives in Kenya. He’s a verified TikTok creator known as @afrobeatswithkamau and made a reaction video calling the trend racist.

“My first thought was I was very shocked to see how this can be taking off as a trend,” he told the BBC.

“No matter where we are, how niche we think our audience is, we have to know that our content is global. A simple video that we make has global implications. People are failing to see that you’re putting down your own people where there’s a history of colourism in India but then imagine, you’re in a global community. I live in Kenya and all my peers are shocked.

“I think one of the first steps is having TikTok take down these videos but also use this as a learning moment to show everyone that your local trend can go global and be mindful of what you’re propagating in your content.”