Tech Tent – does fake news about the coronavirus matter? 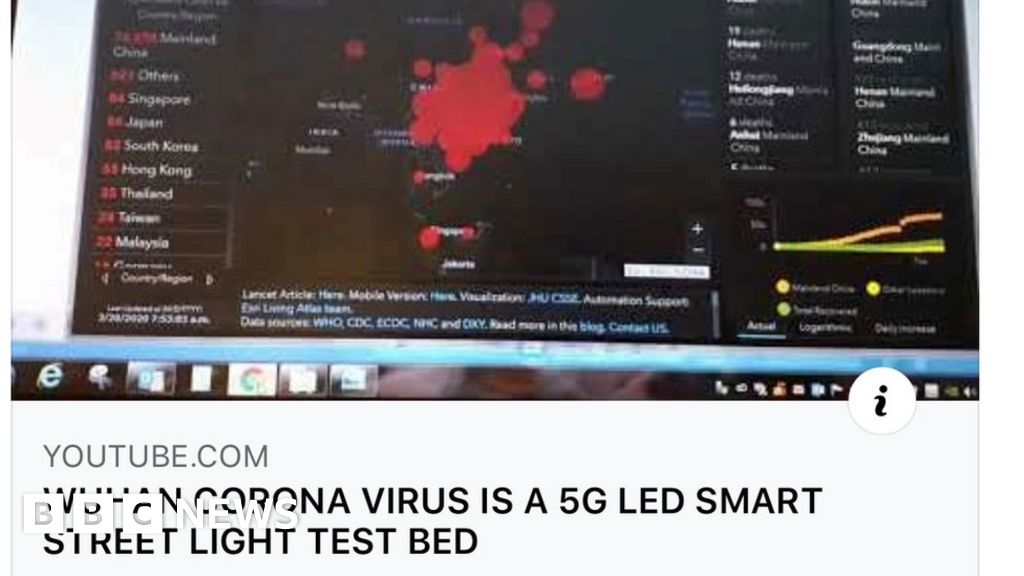 It has been this week’s biggest news story around the world and fears about the spread of the coronavirus have sent stock markets plunging.

But rumours and misinformation about the disease have spread rapidly on social media – and on Tech Tent we ask whether this matters.

As I found when I delved into various Facebook groups and scoured YouTube videos, people who believe in one conspiracy theory are often prone to finding others credible. So in groups set up by campaigners who believe vaccines or the new 5G mobile phone networks are a conspiracy against the public, you can now find posts accusing governments of engineering Covid-19 in a laboratory or that 5G has weakened people’s immune systems making them vulnerable to the virus.

Now you might think this was relatively harmless – after all people have always believed outlandish things and most of the world just laughs and moves on. But Paul Hunter, an epidemiologist and professor of health protection at the University of East Anglia tells us misinformation can be dangerous.

He points to the lessons learned from the Ebola virus in West Africa in 2016. “People who believed conspiracy theories about Ebola were less likely to adopt safe practices, especially safe funeral practices. And so they were putting themselves at an increased risk of getting the infection and ultimately increased risk of dying.”

It is only a few years since we were being told that the river of web data would help us track a disease more effectively. Google Flu Trends tried to predict the pattern of influenza outbreaks by examining search activity. Prof Hunter says he and some colleagues used Google to examine incidences of the norovirus a few years ago, and found it seemed to predict an epidemic several weeks before the official data.

You might think that in our ultra-connected world, we would all be better informed about the disease and what steps we need to take. But Paul Hunter says that while we may be getting more information it is not necessarily of a higher quality.

This makes the provision of accurate information by news organisations all the more important. But some people are probably immune to facts. Within hours of my blog about this issue being published, it was being denounced as “fake news” on an anti-5G Facebook group.