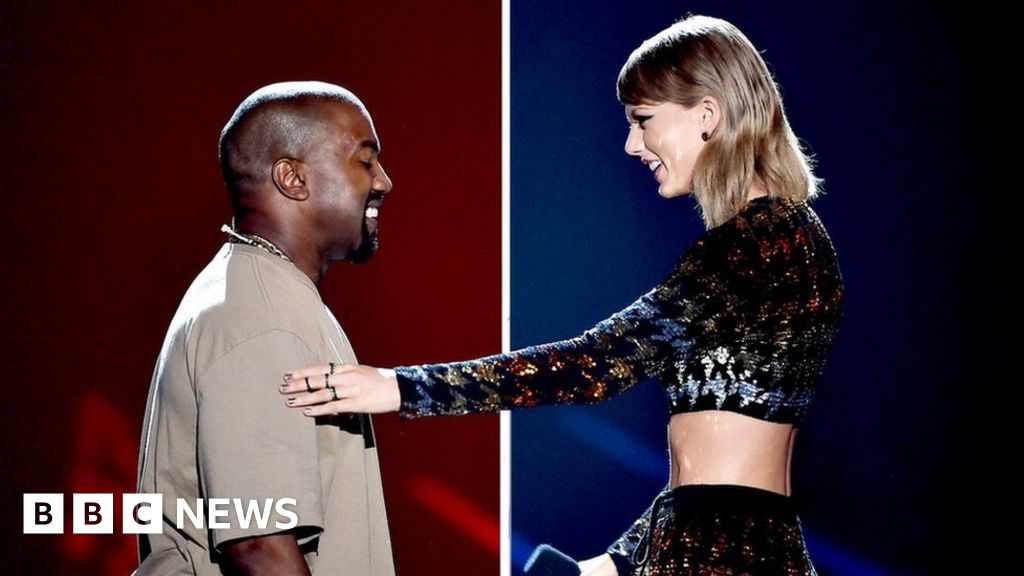 An infamous phone call between Kanye West and Taylor Swift, which triggered a long-running feud, has leaked online.

The call took place in 2016, as West sought Swift’s permission to mention her name in his song Famous.

When the track was eventually released, she objected to a lyric which referred to her as a “bitch”; but West’s wife, Kim Kardashian posted an edited version of the call, saying Swift had approved.

The leak, however, seems to show that West omitted the offensive word.

The two musicians have had a stormy relationship since 2009, when West interrupted Swift’s acceptance speech for best female video at the MTV Music Awards.

Grabbing her microphone, West objected to the award, saying Beyonce’s Single Ladies video deserved the prize more than Swift’s You Belong With Me.

“Taylor Swift, I’mma let you finish,” he said, in a clip that’s become one of music’s most recognisable memes, “but Beyoncé had one of the best videos of all time!”

Their relationship had thawed in the mid-2010s – but the release of Famous prompted a major falling out, with Swift taking particular exception to West’s lyric, “I made that bitch famous”.

“She totally knew that that was coming out. She wanted to all of a sudden act like she didn’t. I swear, my husband gets so much [criticism] for things [when] he really was doing proper protocol and even called to get it approved.”

Kardashian later released an edited version of that phone call, triggering a wave of hatred and vitriol towards Swift, whose social media feeds were bombarded with “snake” emojis from people who felt she’d been duplicitous.

Swift responded with a statement saying the video didn’t tell the full story.

“Where is the video of Kanye telling me he was going to call me ‘that bitch’ in his song? It doesn’t exist because it never happened.

“You don’t get to control someone’s emotional response to being called ‘that bitch’ in front of the entire world.

“While I wanted to be supportive of Kanye on the phone call, you cannot approve a song you’ve never heard.

“Being falsely painted as a liar when I was never given the full story or played any part of the song is character assassination.”

The situation got worse when West placed a nude waxwork of Swift in the song’s video. She discussed the repercussions at length in her subsequent album, Reputation, and made the snake emoji a recurring motif of her 2018 world tour.

‘The feminists are going to come out’

Then, over the weekend, a full 23-minute video of the West-Swift phone call appeared online, and appeared to vindicate Swift’s account.

The rapper first describes the lyric “I feel like me and Taylor Swift might still have sex”, eliciting laughter from Swift, who acknowledges the line is tongue-in-cheek.

“I’m glad it’s not mean,” she says. “I definitely think that when I’m asked about it, of course I’ll be like, ‘Yeah, I love that. I think it’s hilarious.’ But, um, I need to think about it.

A large part of the conversation then focuses on an alternative version of the lyric – “Taylor Swift might owe me sex” – which Swift argues against.

If West releases that version, she says, “the feminists are going to come out”.

Swift’s tone notably changes as she responds; and points out to West that she had sold millions of albums by the time he interrupted her at the MTV Awards.

“But I mean, you’ve got to tell the story the way that it happened to you and the way that you’ve experienced it,” she adds.

Although the clips that have surfaced online are incomplete and fragmented, they seem to suggest that West never raised the idea of calling Swift “that bitch” in his song. And Swift stops short of giving her full approval to the song.

In response, West promises to send her the song and “the exact wording and everything about it,” but Swift’s camp has always maintained the rapper never kept that commitment.

It is unclear how the footage made its way online, but it seems to have done little to persuade die-hard fans of who was in the right: Swift’s fans say she has been vindicated, while West’s maintain her approval of the song was implicit.

Neither side has commented, but both Swift and Kardashian reacted to posts by fans who were fighting their corner.

Kardashian liked a tweet from a fan who wrote, “The video showed nothing new. We all knew that. I’m so confused right now”.

Swift, meanwhile, liked several posts on her official Tumblr account, including one that said: “Who was telling the truth the whole time?” next to a photo of the singer pointing to herself.

“And that is how you let Karma take care of itself,” another fan wrote, referring to the rumoured title of her next album.

Swift’s camp has always contended that West never followed up on his repeated vows to send her the entire song, with or without the “that bitch” line.