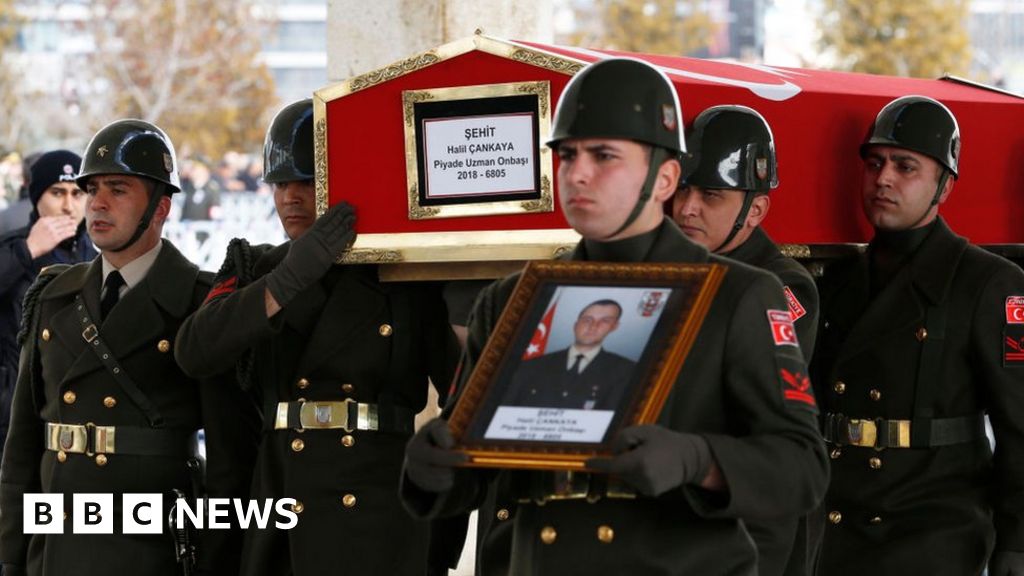 Nineteen Syrian soldiers have been killed in Turkish drone strikes on Idlib, a UK-based monitor has said.

According to the Syrian Observatory for Human Rights (SOHR), the attacks targeted a military convoy and an army base amid increasing violence.

Russia, a key backer of the Syrian government, has warned it cannot guarantee the safety of Turkish aircraft in Syrian airspace.

Tensions in Idlib escalated sharply last week when at least 33 Turkish soldiers were killed in an air strike.

What happened on Sunday?

The pilots of the two Syrian jets brought down on Sunday parachuted to safety over Idlib province, where Turkish troops and rebels have been clashing with Syrian government forces.

Syria, meanwhile, announced that it had brought down three Turkish drones.

Syrian state news said the country was closing its airspace in the north west of the country and that any aircraft that violated this would “be considered a hostile aircraft which must be downed”.

Turkey, which backs rebels in Idlib, said it had also targeted Syrian air defence systems and dozens of tanks.

Turkey has stressed it does not want conflict with Russia during its latest operation in Idlib, dubbed “Spring Shield”.

Turkey claims 2,212 members of the Syrian forces have been “neutralised”, a term used to mean killed, wounded or captured.

But the SOHR said that just over 100 Syrian government troops and pro-Damascus fighters had been killed since 29 February.

Syrian government forces, supported by Russia, have been trying to retake Idlib from jihadist groups and Turkish-backed rebel factions.

The Syrian government advance has displaced nearly a million civilians who have fled to areas near the Turkish border. Turkey says it is already hosting millions of refugees and does not have the resources to let more enter.

Turkey has some troops in observation points in Idlib under a 2018 agreement with Russia. President Erdogan had earlier threatened to confront Syrian government forces if they did not withdraw from positions near the Turkish observation posts.

The attack on Turkish troops last week came after Turkish-backed rebels retook the key town of Saraqeb, to the north east of Balyun. Russia denies its own forces were involved in the fighting in the Balyun area.

But Russia and Turkey are backing opposing sides in the civil war. Turkey is opposed to the government of Bashar al-Assad and supports some rebel groups.

Russia has rejected calls in the UN Security Council for a humanitarian ceasefire in northern Syria, saying the only solution is to chase what it calls terrorists from the country.

The Syrian government, which has regularly been accused of committing atrocities against civilians, says it is liberating Idlib from “terrorism”.

The Turkish and Russian presidents spoke by phone on Friday. They both expressed concern and agreed on the need for “additional measures” to normalise the situation.

Why is Turkey so deeply involved in Syria?

Its long border with Syria has brought it into close contact with the civil war and its strong opposition to the Assad government has made it a natural destination for refugees.

But President Erdogan has said it cannot deal with the amount of people fleeing the civil war. Turkey has vowed to open its doors for migrants to travel to the EU.

Turkey is also actively trying to prevent Syria’s Kurdish community establishing control over the border region, fearing that this would encourage Kurdish separatism within Turkey itself.

It has been accused of seeking to drive Kurds away from the border in order to establish a safe area within Syria to rehouse two million of the refugees it is hosting.