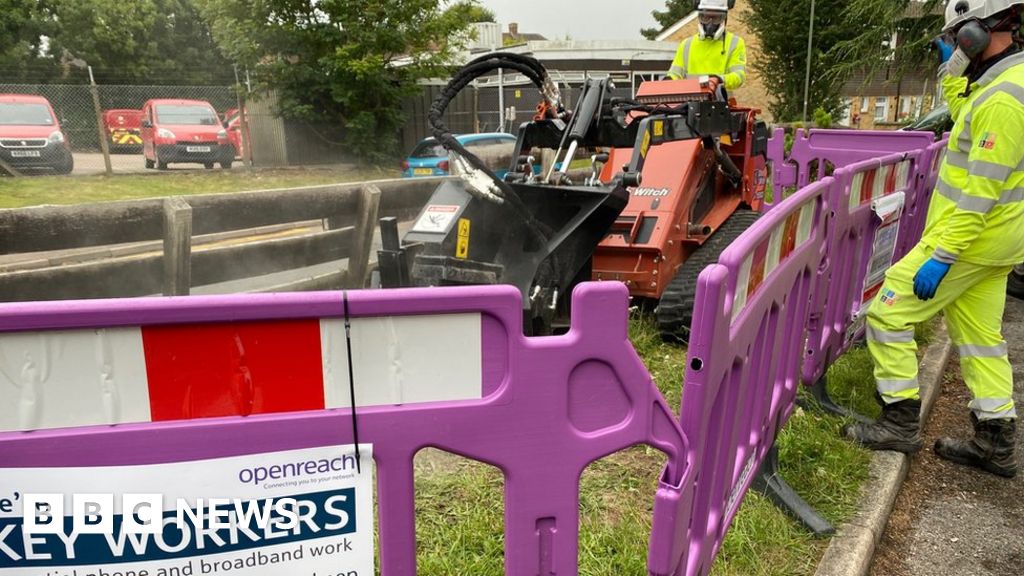 BT has warned the government’s broadband manifesto promise is at risk, if money for rural areas is not allocated soon.

Its Openreach division has unveiled a plan to bring full-fibre broadband to many places in the hardest to reach parts of the country.

But the unit’s chief says ministers must move ahead with their £5bn pledge to bring it to all parts of the UK.

“We need that plan now,” Clive Selley told the BBC.

“And we need to get kicked off on the build now.”

In last year’s General Election, that was slightly refined to a pledge to give everyone “gigabit-capable” broadband, with the possibility that technologies such as 5G could also play a role. The Treasury promised a £5bn fund to make sure the hardest to reach 20% of the country was not left out.

Openreach, which had come under fire for failing to invest quickly enough and sticking with its copper network for too long, has today published a three-year plan to build full fibre in what the regulator Ofcom defines as the final third of the country.

The initiative will see fibre-to-the-property (FTTP) connections made available to 3.2 million premises in 250 towns and villages, including Thurso in the far north of Scotland, Aberystwyth on Cardigan Bay in Wales and Lingfield in Surrey.

But plans to reach the most remote places await details of how the government plans to allocate the £5bn fund. Last time there was a rural broadband subsidy scheme, all of the £1.7bn of public money went to BT.

This time, ministers have made it clear that Openreach will be just one of a number of beneficiaries, which will include new fibre providers such as Cityfibre and Gigaclear.

But the companies want clarity on where each will be expected to build if they are to hit the 2025 deadline.

“The danger if it drags on is that the date will move, and none of us wants that,” said Mr Selley.

“We want a world-class digital infrastructure, not just for the towns and cities of the UK but for everyone in the UK. That is the government’s manifesto promise.”

The founder and chief executive of CityFibre, Greg Mesch, agrees.

He believes the £5bn will help his company speed up its fibre rollout.

“It’s an accelerant,” he said,

“It’s like throwing gasoline on the fire. The longer they wait, the more they delay the momentum because it takes quite a while to mobilise all those contractors to get all of those engineering resources out.”

CityFibre announced in March that it now plans to roll out full fibre to 62 towns and cities, targeting up to 8 million homes and businesses.

In Lingfield, Surrey, a few homes have already been connected to Openreach’s new fibre network.

Lisa and Jon Langford, whose house on a new development outside the town is surrounded by fields, had a slow connection until then.

“We couldn’t have someone working and [someone else] watching a movie at the same time,” Lisa explains.

When the coronavirus lockdown arrived, this became a serious issue. Lisa works for an organisation providing essential software to the World Health Organisation, while Jon’s job for an international events firm usually means he’s constantly on a plane – suddenly both were working from home.

Because Lisa qualified as a key worker, they were able to get the full-fibre connection installed. With two teenage children online for much of the day and their parents on constant video conferencing calls, the fibre link has proved its worth.

But Openreach has no plans to stretch the new network a few miles up the road from Lingfield, to the village of Blindley Heath.

When we knocked on the door of one home, the owner told us she was not surprised: “Blindley Heath always misses out,” she said, complaining that her broadband was intermittent at best.

And many broadband experts think the 2025 deadline to give everyone full fibre will prove extremely challenging.

Andrew Ferguson, whose Thinkbroadband site monitors the industry, happens to live in Lingfield, and is looking forward to getting his full-fibre connection.

But he said reaching every home would be a major job – “six extra poles just for me” – and he cannot see 100% coverage arriving on time.

“I reckon somewhere between 70 and 80% in 2025,” he says. “A lot depends on what the government does with this £5bn and how quickly that can be done, so we need to see that start ramping up and start building in the next year,” he said,

The telecoms firms are stressing that the full-fibre rollout should also provide a big boost to the economy.

CityFibre has announced a three-year plan to recruit up to 10,000 people, seeking both experienced construction and telecoms workers, and unemployed UK residents.

Openreach has recruited 6,500 apprentices to work on the effort.