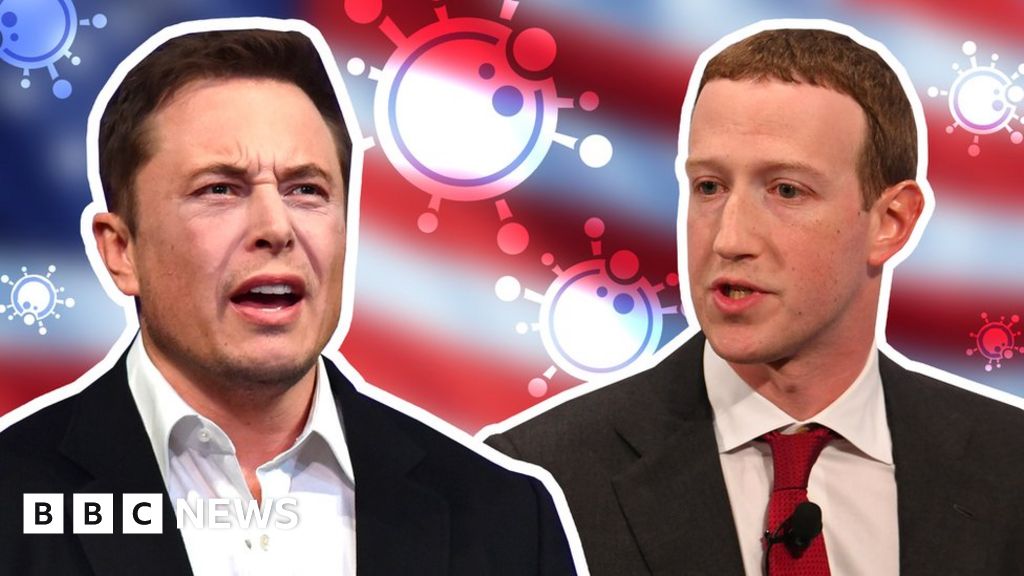 The technology giants of Silicon Valley are among the few winners from the global pandemic. Their share prices are holding up or even surging ahead as investors bet they will come out of the crisis even stronger.

But Covid-19 has also shone a spotlight on two tech tycoons with radically different attitudes to the battle to control the virus: Elon Musk and Mark Zuckerberg.

The contrast was seen in way the two men treated what is usually the sober, perhaps even somnolent, environment of an analysts’ conference call after their latest financial results.

For the last few weeks, Tesla’s mercurial founder has been tweeting in increasingly intemperate fashion.

First he expressed scepticism about the threat from the coronavirus. Then he condemned what he saw as the excessive measures to combat it.

The lockdown in California has meant the closure of his main production plant in Fremont, and Mr Musk wants it open again.

“Bravo Texas!,” he tweeted yesterday, linking to a report about the state easing restrictions.

But it was during the analysts’ call, following results delivering a surprise profit during the first quarter, that his anger boiled over.

In his opening statement Musk did not mention the virus. But in response to questions, he railed against California’s order to residents to stay at home:

“To say that they cannot leave their house, and they will be arrested if they do, this is fascist. This is not democratic. This is not freedom. Give people back their goddamn freedom.”

His language became even more extreme at one point.

He said an extension of the shelter-in-place policy was “forcibly imprisoning people in their homes against all their constitutional rights”.

He added: “Breaking people’s freedoms in ways that are horrible and wrong is not why people came to America or built this country.”

He then used a strong expletive – one which it is safe to say I have never heard on a public conference call – before continuing: “Excuse me. But outrage – it’s an outrage.”

There was a fair bit of outrage in response. Not from the analysts who continued asking about gross margin and the rollout of an app, but from onlookers on Twitter.

Some pointed out that the Tesla tycoon has proved far from prescient in his analysis of the threat from the virus.

On 19 March, he remarked that there had been no new cases in China and added: “Based on current trends, probably close to zero new cases in US too by end of April.”

So far, there have been over a million coronavirus cases in the United States and about 60,000 deaths.

Meanwhile, Facebook’s founder was talking about his company’s latest results, which saw a fall in profits but still managed to please investors despite a warning that the business was “facing a period of unprecedented uncertainty”.

Mark Zuckerberg’s language on his conference call with analysts was not as colourful as that of Elon Musk.

But he was pretty frank in advancing an opposing view to the Tesla tycoon. A rush to return to normality was a really bad idea for both public health and the economy, he said.

“While there are massive societal costs from the current shelter-in-place restrictions, I worry that reopening certain places too quickly before infection rates have been reduced to very minimal levels will almost guarantee future outbreaks and worsen longer-term health and economic outcomes.”

Now you could say it is easier for Mark Zuckerberg to take this stance – his employees can do a pretty good job of keeping Facebook ticking over from home, while Tesla staff won’t be building any cars in their backyards.

While the social media firm may be concerned about a fall in advertising, it is far better placed than old media businesses to weather the downturn. Its share price, which is only modestly down since February, reflects that.

Mind you, Tesla shares continue to defy gravity. You might think that with its main factory closed, a low oil price making electric cars look less desirable and a chief executive apparently incapable of self-control, investors would be heading for the hills.

But no, the shares were already back up near an all-time peak and are set to climb higher after the latest results.

All this means that Elon Musk could be about to enjoy a bumper pay-out. He looks on track to hit the targets set by his board for boosting the value of the company, which would trigger the opportunity for him to make a profit of around $740m on stock options.

You might have thought that Silicon Valley hubris and Wall Street hysteria about tech stocks were two things that had gone right out of fashion in the last couple of months. Try telling that to Elon Musk.