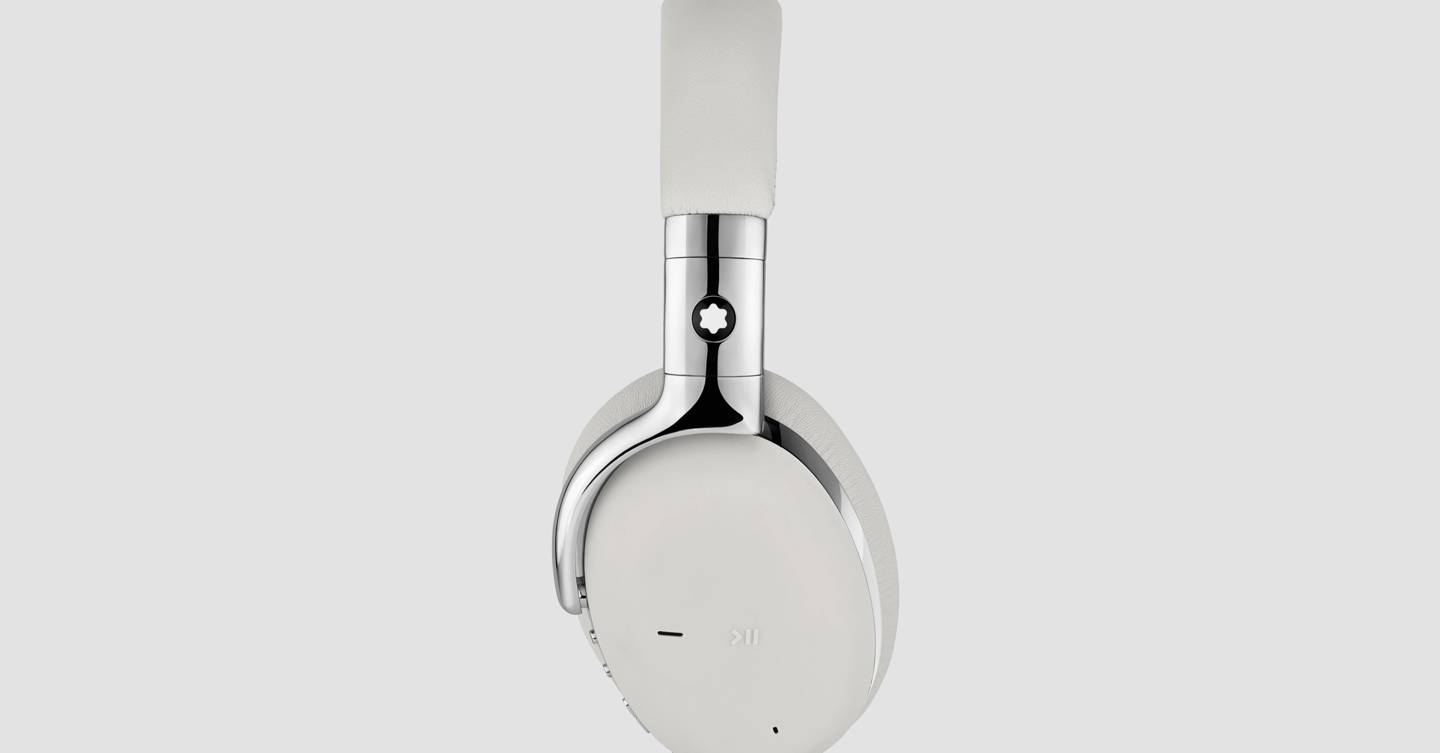 There was a time when you’d go to a headphones specialist if you wanted to buy a pair of headphones. But those days are long gone – today DJs and footballers have headphones to sell you, today every brand from adidas to The Conran Shop has a range of headphones with which to tempt you.

So it’s only momentarily jarring to find Montblanc, doyen of luxurious writing instruments for more than a century and more recently to be found bringing its particular style of understated opulence to everything from watches to leather bags, wants to sell you a pair of headphones. Why wouldn’t it?

Montblanc, of course, pitches its products into that rarefied area of the market where design and craftsmanship are only slightly more important than the charging of an uber-premium price: they cost £525. It simply wouldn’t do for a Montblanc product of any description to be anything other than wallet-shudderingly expensive. So it’s no surprise to find Montblanc’s first foray into the world of headphones, these MB01s, has a casually prodigious price tag attached.

Yes, you may be well-heeled enough to not give the price a second thought. But for the rest of us, can the MB01s possibly make sense if judged purely as headphones rather than as lifestyle accessories? For the rest of us, after all, value for money must still mean something.

Every headphone specialist from Bose to Sennheiser is ready to sell you a hugely accomplished pair of wireless noise-cancelling over-ear headphones for roughly half this money. Does the prospective Montblanc MB01 customer care? Probably not. Certainly Montblanc thinks it has more in play here than simply performance and reliability – it’s concerned with “the luxury business lifestyle”.

There’s no two ways about it, the MB01s score heavily here. For an item as functional as a pair of over-ear headphones, where the scope for radical design is extremely curtailed, Montblanc has managed to make the MB01s look both distinctive and discreet at the same time. Which is no mean feat.

They’re a compact design when compared to the majority of similarly specified alternatives. The liberal use of soft, flawless, beautifully crafted and mildly aromatic leather won’t sit easily with luxury businesspeople who also happen to be vegan, but Montblanc has expertise where materials like this are concerned. The headband, earpads and earcups all feature plenty of skillfully applied and perfectly finished leather, and as a consequence the MB01s look and feel good. And expensive.

Black leather with chromed metal, grey leather with polished metal, brown leather with gold-coloured metal, the Montblancs adjust smoothly and feel resilient. The little cutaways on the earcups for the noise-cancellation mics take maybe one per cent of the shine off the impression of sleek sophistication, but that still leaves the look, feel, build and finish of the MB01s standing at 99 per cent. Which is a high score at any price.

Like the majority of headphones of this type, the MB01s are all about the right-hand earcup. In the slim and immaculately applied polished metal band running all the way around the right earcup there are a number of physical controls. From the top, these buttons are to summon Google Assistant, to cycle through the active noise-cancelling settings, to turn the volume up or down, and to power up or down plus initiate Bluetooth pairing.

There are also a few tiny tell-tale lights indicating status, and a USB-C input for charging. In addition, there are a couple of mic openings to bolster those on the face of the cup itself. The face of the earcup also features the Montblancs’ only physical playback control: a quite sizeable ‘play/pause’ button. And it’s most certainly a button, rather than a touch control.

On the left-hand side, there’s a similarly decorative polished metal band – but it’s only interrupted by a single mic cutaway. Left-handers, you’re overlooked yet again.

The MB01s use Bluetooth 5.0 for wireless connection, and are capable up to aptX HD standard – so even the heaviest-duty digital files from a streaming service or network-attached storage are available. Sound is served by a couple of 40mm neodymium drivers, one behind a fabric cover inside each earcup.

Inside their packaging, the Montblancs are supplied with the poshest USB-C cable this reviewer has ever seen, along with a fabric travel bag and a flight adaptor. There’s also a USB-C-to-analogue 3.5mm cable in case you run short of battery power. Both cables are, like the headphones themselves, discreetly branded with the Montblanc six-pointed star.

The battery itself is a reasonable 730mAh, and should be good for roughly 20 hours of playback time. From ‘flat’ to ‘full’ should take no more than two hours, and it’s possible to force in three hour’s-worth of playback from just a ten-minute burst of charging.

So far, this is business as usual. But the MB01s are giving away a few features to their more affordable rivals from Sony, Bowers & Wilkins and all the rest. For instance, there are no accelerometers here – so the headphones will continue blithely playing no matter if you take them off your head, lay them flat or fold them up (thanks to plenty of articulation, they fold up pretty small).

There’s no facility to fiddle with the sound signature, either, because the Montblancs don’t currently feature a control app or any EQ adjustment. The company seems confident it will have an app, with customisable EQs included, ready for April 2020 – but Montblanc wouldn’t be the first electronics brand (if indeed that’s what Montblanc is now) to find itself trapped in app development purgatory. We shall have to wait and see.

The active noise-cancelling manages to be light-touch yet quite effective, but there’s not a lot of adjustability here, either. Your choices are ‘live mode’ (which boosts outside sounds during playback), ‘noise cancellation off’ or ‘noise cancellation on’. ‘On’ does a good job of negating outside noise while resisting that sensation of ear-pressure that some alternatives deliver – but it’s not going to magically rid you of all background drone from the aircraft you’re sitting in. Even if you’re in first class (as we somehow imagine every MB01 owner will be).

It’s quite obvious Montblanc backs itself where its ability with materials and finish is concerned – and the MB01s are just as impressive a product in these respects as anything else in the Montblanc portfolio. But it also has the self-awareness to recognise its lack of expertise where voicing a pair of headphones is concerned. That’s why the company involved Alex Rosson in the sonic aspects of its MB01 project.

(If you’re unfamiliar with Alex Rosson, give him (or Rosson Audio Design) a quick Googling. His credentials in this area are hard to overstate.) It was an astute move. In almost every respect, the MB01s are an articulate and convincing listen.

The best headphones for any budget in 2020

First up is a TIDAL Masters file of Stevie Wonder’s He’s Misstra Know-It-All and it plays into the Montblancs’ hands almost completely. The MB01s describe a large, three-dimensional, well-integrated soundstage and allow each of the numerous instrumental strands in the recording plenty of elbow-room. The shape of the drum-kit, for example – hi-hat over towards the far left, snare and kick-drum more-or-less central, crash cymbals high on the right – is absolutely explicit. The peerless vocal sits in a pocket of space front-and-centre, while the rest of the elements – bass guitar, keyboards, hand-claps and all the rest – all keep a respectful distance even as they integrate smoothly into a convincingly unified whole.

The tonal balance is undeniably on the warm side – there’s heat in the bass sounds, while the very top of the frequency range is rolled off somewhat. Presumably this is what ‘good taste’ sounds like to Montblanc – and it’s a sensible, pragmatic and understandable approach to take. There’s no denying a rich emphasis appeals not only to the rich.

A less obliging recording like Scott Walker’s mildly bonkers Farmer in the City loses a little of its menace thanks to this unthreatening tonality. But the tune’s moments of melodic prettiness are given full expression by the MB01s, and the large- and small-scale dynamic variances the song cycles through are described with a very agreeable sort of authority. This recording also showcases the Montblancs’ ability to give proper expression to spaces and silences – the gaps between the foreboding strings, even-more foreboding reed section and Walker’s painfully intense vocal performance are rendered cleanly, and with skill.

Despite their slightly overheated tonality, the MB01s have no problem cracking on if the tempo demands it. Blawan’s Many Many Pings fairly charges forward, the Montblancs observing the stop and start of each synthesised element with precision even though the bass deliberately slurs and crunches and drags at the rhythm. The numerous bleeps and squelches retain most of their machine-derived chilliness, and the MB01s manage to unite what is a large number of competing elements into a coherent whole.

In fact, the Montblancs are a game listen in any circumstances. The Hold Steady’s tilt at Bob Dylan’s Can You Please Crawl Out Your Window? revels in the fine details of piano and organ, and the song sounds eloquent and potent. A live-in-the-studio ensemble piece like this relies a great deal on the call-and-response relationship between the instruments, and the MB01s describe the timing of this recording with calm authority.

Overall, the Montblanc MB01s are a far more credible proposition in practice than they might appear to be in theory. Yes, in ultimate terms they play it slightly safe on a sonic level and yes, they’re not the most attacking headphones you ever heard. But they’re a beautifully realised product in the physical sense – and as the offering of a high-end accessories brand with precisely zero experience of building headphones, they’re a remarkably enjoyable and persuasive listen.

📺 The best shows coming to Disney Plus UK

💩 Gender neutral toilets are a massive failure (so far)