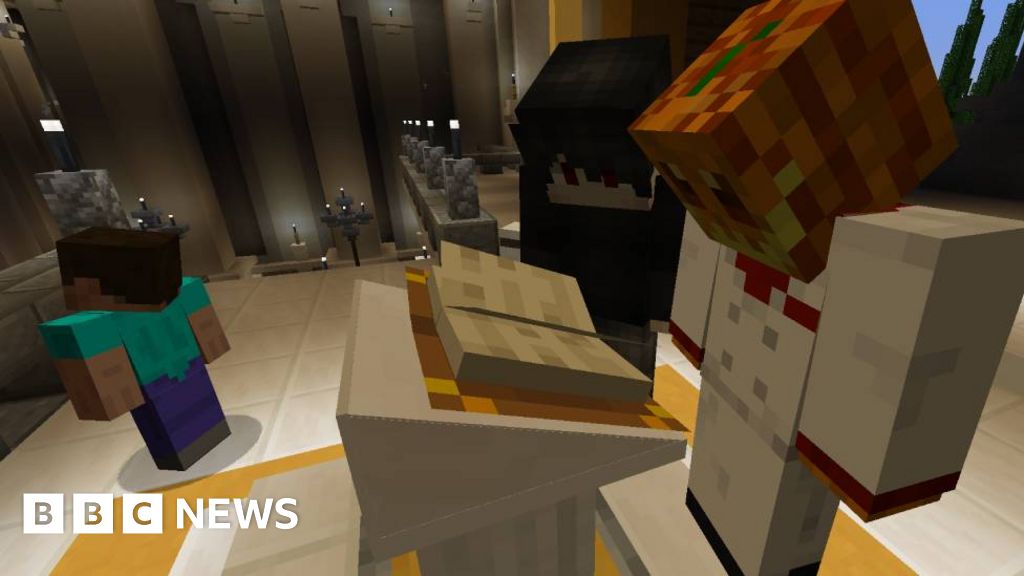 It started out as a project in an online forum and turned into the best-selling video game of all time, but now Minecraft is being used for something even its creator would not have dreamt of.

The iconic game based around placing Lego-like blocks with more than 145 million players each month has been turned into a hub of free speech.

A virtual library has been meticulously created to host articles written by journalists which were censored online.

Work by Jamal Khashoggi, the journalist killed by Saudi agents in 2018, can be read among the plethora of books in the library.

The project was created by non-profit organisation Reporters Without Borders, which seeks to defend the freedom of information worldwide, and the Minecraft library itself was built by design studio Blockworks.

Christian Mihr, executive director of Reporters Without Borders Germany, told the BBC that Minecraft was good for the project as he believes it is not seen as a threat by governments which censor their media.

“We chose Minecraft because of its reach,” he said. “It is available in every country. The game is not censored like some other games which are under suspicion of being political.

“There are big communities in each featured country, that’s why the idea came up – it is a loophole for censorship.”

He said the authors were chosen to represent the countries where press was censored, so that people from those communities would be able to access their work.

But he clarified that permissions were sought before republishing in the library.

“We didn’t put any content in the library without the approval of respective authors themselves – if they are alive.

“In the case of Jamal Khashoggi we spoke to family members – in respect of people who have been killed, and the safety of their families.”

Nick Feamster, Neubauer Professor of Computer Science at the University of Chicago, told the BBC that the library could be effective at beating the censors, but he was concerned about how governments may respond.

“It’s an interesting idea,” he said, “But I think there are still some issues. Governments will know about this – the articles are going across the internet. It’s not going to be foolproof against a determined adversary.

He said that the strength of the library came from its use of entanglement – mixing up the censored material with the video game in the eyes of the censors.

“By entangling these two things you force them to share content,” he said. “You can’t censor this one without the other.”

Meanwhile Helmi Noman, a Research Affiliate of the Berkman Klein Centre for Internet & Society, said he felt the library would be likely to have a limited audience.

“The censored content is dynamic, diverse and distributed,” he said, adding that in his research “the users prefer approaches that don’t pre-select and compartmentalise content in certain spaces online.

“Any approach that doesn’t create a seamless and secure browsing experience of the entire web, social media and direct messaging apps will likely have limited success.”

The server, which holds a maximum of 100 players at once, was regularly inaccessible due to how many players were trying to log on at once. Despite this cap on simultaneous users, it has been visited by 3,889 players from 75 different countries and has been downloaded over 7,000 times.

After two hours of trying, the BBC managed to visit the virtual library and asked its patrons what they thought about it.

SoulfulGenie said they thought “it needs more books and a new section on North Korea” and another user called it “ingenious in many ways”, adding that, as the library may be downloaded and reuploaded by other users, “it is easy to replicate and therefore hard to kill”.

Meanwhile, other players focused on the appearance of the library, with ReduxPL saying it “looks incredible indeed”.

The design of the library by Blockworks was no small feat, taking a team of 24 people from 16 different countries around 250 hours to construct.

James Delaney, Managing Director of the design company, told the BBC that the aim was to create a classical design which was “on the border of fantasy”.

“It is kind of plausible as a real building,” he said, “but is pushing the limits of what is possible.

“We went for a design in the neoclassical style. It’s similar to things like the British Museum and public libraries in New York.”

Outside of these influences, he said Minecraft was improvisational at its core, so the builders were not restricted to set designs.

“With many people working on the same project,” he said, “people see each others’ work and have to respond in real time. So it is a very reactive way of working, and that changes the look.

“The style is chosen to represent power and authority – we wanted to turn that on its head.