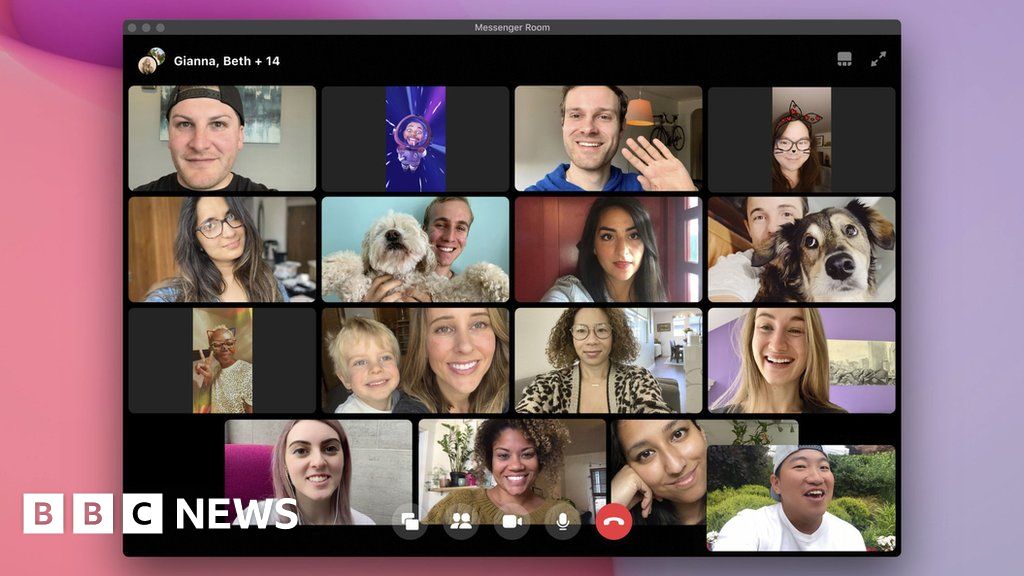 Facebook has added a wave of new video-calling features to WhatsApp, Messenger and its main app, following increased demand for social video calling.

New Messenger Rooms will let people start group video chats that can be joined by up to 50 people.

The company told the BBC it released the features earlier than planned due to the coronavirus lockdown.

Facebook said it had worked with cryptographers to prevent unwanted guests from dropping into chats.

Video-calling services have seen a sharp rise in use during the coronavirus pandemic. Facebook said video-calling on Messenger had doubled since last year, in areas most affected by coronavirus.

Rival app Zoom saw daily active users grow to 300 million in April. And Houseparty, owned by Fortnite-maker Epic Games, was downloaded more than two million times at the beginning of March, as the first major US cities issued stay-at-home orders.

Some apps, such as Microsoft Teams, have offered premium features for free during the pandemic.

Like Houseparty, Messenger Rooms will let people drop in and out of group video chats while the “room” is open.

John Hegeman, vice president of news feed for Facebook, said the company wanted to recreate the “serendipity” that happens in the physical world, something he claimed video-conferencing competitors did not do.

“In the physical world, you have the ability to bump into people… so, we’re hopeful that some of that serendipity will be able to occur in this product,” Mr Hegeman said.

Rooms can be created via Facebook or Messenger, and the company said it planned to add the feature to Instagram, WhatsApp, and its Portal video-calling devices “soon”.

People creating a Messenger Room will be able to keep their room private, block unwanted participants and send invitations to people who are not on Facebook.

Participants will be able to use augmented reality filters and change their background in real-time.

Publicly discoverable rooms will be listed at the top of the Facebook news feed.

The service was tested in Argentina and Poland, where Facebook Messenger is heavily used. During testing, rooms could support 17 to 20 participants at a time, but Facebook said that number would grow to 50 over the coming weeks.

Facebook acknowledged that it had learned from competitors when developing its product.

Zoom has been working to prevent “zoombombing”, which is when uninvited guests drop into video calls. Often they shout abuse or share pornography.

Stephane Taine, director of product for Messenger, said avoiding this issue was “top of mind” for Facebook.

The company worked with cryptographers to make the links for the Messenger Rooms difficult for hackers to guess.

At launch, the chats will not be end-to-end encrypted. Mr Taine said he hoped to add encryption in the future.

Facebook stressed it would not listen to or monitor video calls on its platforms.

However, the social media giant will still gather data on when users open a Messenger Room. The company said that data would be used to improve the product and the overall Facebook experience.

Other features announced today include: