Joe Wicks: The Body Coach is assisted by wife Rosie for PE lesson 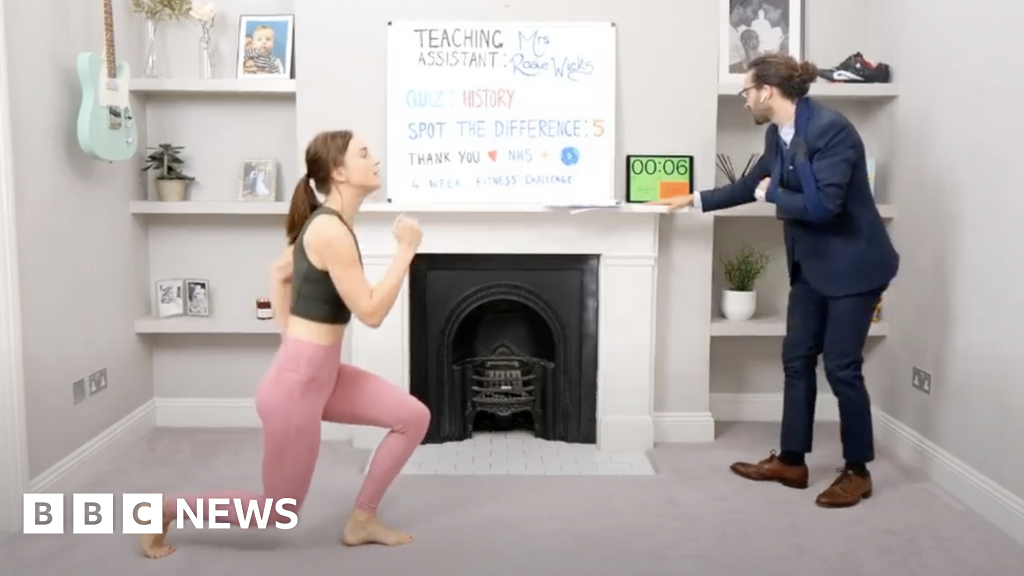 Joe Wicks had a bit of help with his online PE lesson on Monday from a guest teaching assistant – his wife Rosie.

The 33-year-old, who is also known as The Body Coach, has been leading PE classes on YouTube during lockdown.

But Rosie offered to help with Monday’s class after Joe was unable to host it by himself, having spent the weekend in hospital.

“You’re an amazing wife and I would not be able to do this without you,” he told her during Monday’s livestream.

Joe had minor surgery on his hand in March after being involved in a bicycle accident.

After the operation, where wires were inserted into his hand, he was seen in his weekday PE lessons with his left arm bandaged up.

This weekend, he admitted to hospital after his hand started “throbbing like liquid hot magma” – which he said was a suspected infection from the surgery.

He posted pictures on social media from his bed at Kingston hospital, where he underwent further surgery to have the wires removed.

On Monday, he was seen wearing a suit and a sling during his morning PE lesson, while introducing Rosie as his teaching assistant.

He joked that he even had a note from his mum to explain why he had to miss Monday’s PE lesson.

“This is an open wound so doctors have said I can’t be jumping around,” he told viewers.

“And I have got a note saying ‘Joe is unable to do PE today because I forgot to wash his PE kit. He was also bitten by a dragon on Friday.”

Wicks had dressed up as a knight during Friday’s lesson and his two children were in dragon costumes.

The YouTube star is donating his income from advertising on his PE lessons to the NHS – and says he has raised £200,000 so far.

Writing on Instagram on Sunday evening, Wicks said: “I’ve just got out of hospital with an infection in my hand and whilst high on morphine last night I sent [Rosie] a text saying ‘Rosie I think I need your help, I can’t do PE Monday, I’m in bits’, to which she replied ‘Don’t worry darling, I’ll do it with you’.

“This is way out of her comfort zone and I love her so much for it. What a special woman I’ve got ☺️ She’s quite shy and feeling nervous now it’s actually happening.”