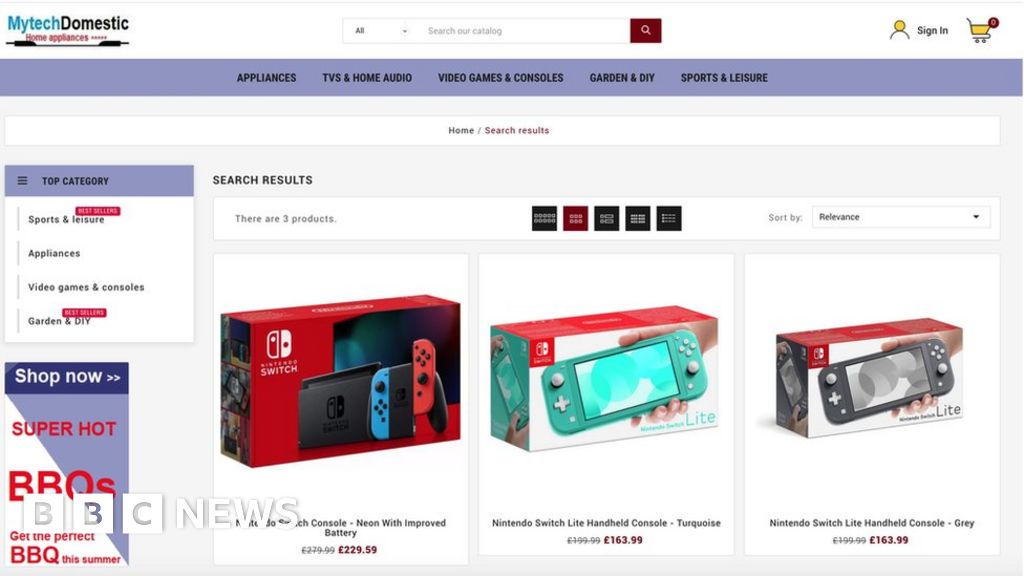 MyTechDomestic accepted payments via direct bank transfers only – despite indicating support for credit cards and PayPal – and falsely claimed to be owned by a UK-registered company.

It was flagged to Google last week but the US company took action only after being contacted by BBC News on Monday.

The site’s operator did not respond to several requests for comment.

However, the platform went offline shortly after BBC News asked for a response to customers’ claims it amounted to a “scam”.

Action Fraud – the UK’s national reporting centre for fraud and cyber-crime – is looking into the matter after receiving a complaint from a member of the public.

“Given the large numbers of people who view these adverts, Google should move much more quickly in response to reports of scams, and be proactive about vetting them to help prevent people losing money to fraudsters,” Which? Computing editor Kate Bevan said.

MyTechDomestic’s website was registered with a Canadian domain registrar on 19 April.

It was subsequently promoted via ads bought from Google’s Shopping service, meaning its listings featured a “By Google” tag when they appeared within its search results.

By late last week, the site was top billed for several gadgets sold out or priced at a premium elsewhere.

These ads appeared at the top of Google’s mobile search results and to the side of some desktop searches.

The store often indicated it had relatively low supplies left in stock and frequently priced products at an 18% discount.

And although its pages featured logos for American Express, Mastercard and PayPal, at point-of-sale it allowed customers to pay via a bank transfer only.

But after one user drew attention to this being unusual, on a post to MoneySavingExpert.com’s forum, the site switched to using a English bank.

MyTechDomestic stated it was operated by a London-based corporation, for which it provided an address and registration number.

But that company turned out to be a seven-year-old business consultancy with similar initials, which denied involvement.

“MyTechDomestic is nothing whatsoever to do with MTDO Ltd,” a spokesman said.

“We don’t sell anything on the internet and we were shocked that it was that easy to set up something that steals someone else’s company’s identity.”

MTDO said it had reported the issue to Google on Friday, 8 May, via its Report Phishing tool.

However, the adverts remained online until Monday evening.

After being contacted by BBC News, Google began its own investigation.

It concluded the site had violated its “misrepresentation policy” and should have been dealt with more quickly.

“We take dishonest business practices very seriously and consider them to be an egregious violation of our policies,” a spokeswoman said.

“We have a tool where anyone can report these ads and these complaints are reviewed manually by our team.

“In 2019, we removed 2.7 billion bad ads and we’re constantly updating our policies as we see new threats emerge.”

The site’s registrar, PlanetHoster, confirmed it had also taken action of its own.

“Currently, the website mytechdomestic.com is suspended for a violation of our policy,” it said in a statement.

“Unfortunately, we cannot share more information about this case without an official warrant.”

Meanwhile, several of the site’s users voiced concerns they may have been “scammed” out of hundreds of pounds, in complaints posted to TrustPilot’s review site.

“[An] investigation is currently ongoing with my bank and the Action Fraud police,” one told BBC News.

One cyber-security expert said consumers should be “wary” of listings from unfamiliar names – even if they were promoted by Google.

“Having been warned of a suspicious site, Google could easily have confirmed that the site was less than a month old and asking for payment in a way which doesn’t protect consumers,” Graham Cluley said.

“At the very least, it should have suspended the shopping lists while it investigated the domain.”