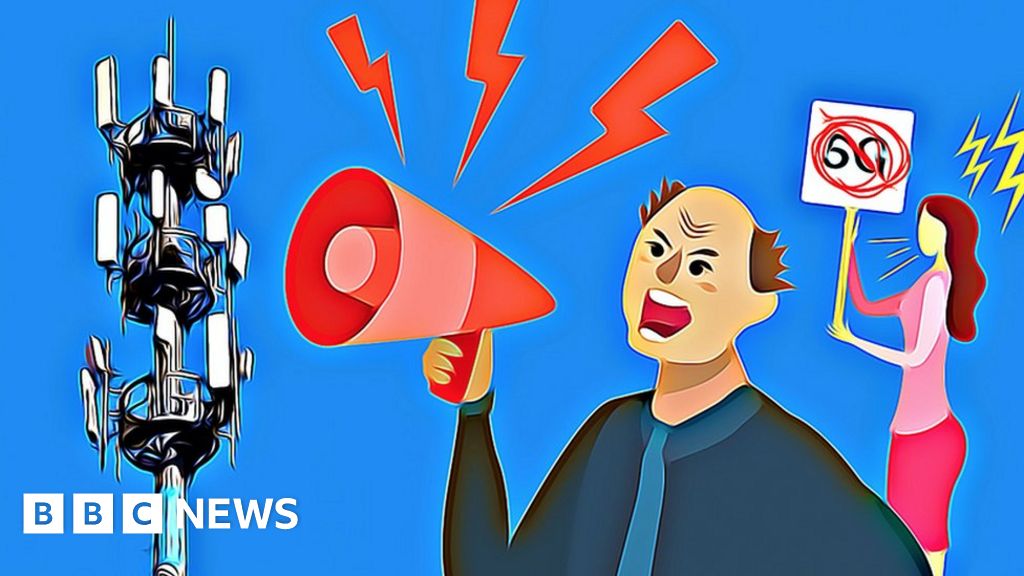 Last month, the town council of Glastonbury in Somerset published a report calling for a government inquiry into the safety of 5G.

It promised to oppose the rollout of the next-generation mobile networks in the town.

Now, three members of the group that produced the report have told the BBC they resigned because it was taken over by anti-5G activists and “spiritual healers”.

They fear it could lend credibility to conspiracy theories, such as 5G being linked to the spread of coronavirus.

“The whole thing was completely biased from the beginning,” says Mark Swann, one of those who resigned.

“Genuine scientific expertise has been scorned in favour of conspiracy and hearsay,” wrote David Swain in his letter of resignation.

5G is the next generation of mobile phone technology. It promises faster downloads and increased capacity.

The radio waves involved in 5G – and the previous generation networks – sit on the low frequency end of the electromagnetic spectrum.

Less powerful than visible light, they are not energetic enough to damage cells – unlike radiation at the higher frequency end of the spectrum, which includes the sun’s rays and medical x-rays.

Get the facts: BBC Reality Check

The report, published after a six-month inquiry, said the council would oppose the rollout of 5G, while accepting it had no power to halt it.

Glastonbury’s 5G Advisory Committee was made up of nine councillors, and nine local residents who responded to adverts calling for people with relevant experience to help decide whether 5G was safe.

Among the volunteers were:

All four ended up resigning before the report was completed.

“I joined the working group in good faith, expecting to take part in a sensible discussion about 5G,” says Mr Swann. “Sadly the whole thing turned out to be a clueless pantomime driven by conspiracy theorists and sceptics.”

Mr Cooper reached the same conclusion: “I worked out there were only four of us who were neutral. And the others were all absolutely against 5G, either strongly or weakly.”

Most of the evidence the committee heard was from witnesses who had stated their support for a moratorium on the rollout of 5G.

They included retired American professor Martin Pall, who in 2019 claimed that wireless networks would make all human beings sterile if they were not switched off within two years.

Another witness was Dr Andrew Tresidder, a former GP whose website offers flower remedies and emotional healing. His presentation focused on people claiming to suffer from “electromagnetic stress”, which he said was often not taken seriously by mainstream doctors.

Committee member Roy Procter, a spiritual healer who claims dowsing can heal “sick houses”, also gave a presentation. In the report, he speculates about a link between the coronavirus and 5G, and recommends that the council eliminate all wi-fi connections.

The committee’s chairman, Councillor Jon Cousins, told the BBC he strongly disagrees with the suggestion that the meetings were biased towards pseudo-science.

“Equal weight was given to all contributions,” he says, adding that councillors “were able to take into account the prejudice, predetermination and bias displayed on all sides of the argument”.

In the report, Mr Cousins said Glastonbury had punched above its weight, and other councils had been in touch about its recommendations.

But both Mr Swann and Mr Cooper were particularly concerned about the role of an external member of the committee.

Christopher Baker was instrumental in choosing witnesses to appear before the committee. He also gave his own presentation in which he attacked the credibility of ICNIRP, the International Commission on Non-Ionizing Radiation Protection, the body which sets the safety standards for mobile network emissions.

Mr Baker has campaigned against 5G across the south-west. Before the committee was formed, he had been lobbying Glastonbury councillors to ban the technology. In a Facebook post in May 2019, he outlined his campaigning activities and bemoaned the lack of support from residents.

“The only thing that is missing is the support from the community! I can’t do this for you on my own, this is about you and for you,” he said.

But in a YouTube video posted in July, he tells another anti-5G activist how he helped convince Glastonbury Town Council to get the investigation underway. He encouraged others to organise local petitions.

He has also appeared in videos alongside Mark Steele, another anti-5G conspiracy theorist who claims the coronavirus is a hoax, and has posted videos of himself harassing telecoms engineers.

Mr Cooper says the committee was supposed to be made up of people who lived in the area or had a business there. He complained that Christopher Baker did not meet those requirements because he lived in Hampshire, which does not even border Somerset.

He resigned after the complaint was ignored, describing Mr Baker as a “semi-professional anti-5G activist”. He highlighted a video in which Mr Baker admitted some of his fuel costs were paid by a benefactor.

Mr Baker told the BBC it was true that he lived in Hampshire, but said he had long-term connections to Glastonbury, and in any case other members of the committee were from outside the town. He admitted that he did receive some funding from a benefactor he refused to name.

“I don’t have a lot of money, and if I travel half-way up the country to give a presentation, the least I expect is someone to contribute something towards my fuel bill.”

He said those who resigned from the committee were dismissive of the evidence, rude to witnesses such as Prof Pall, and a disruptive force at the meetings.

Committee chair Jon Cousins agreed: “Some of the behaviours displayed by non-councillor members when they could not debate by ‘reason’ broke Glastonbury Town Council’s code of conduct.”

This is strongly denied by Mark Swann and his colleagues.

The committee did hear evidence from Mobile UK, the mobile operators’ trade body.

Its presentation was criticised by one member for being “glossy”, and others alleged there was no attempt to answer questions.

Gareth Elliott of Mobile UK denied that: “We answered everything that was asked of us.” However, he said it was a cordial meeting and his organisation respected the views of the committee.

He recounts an incident where one committee member arrived late to a meeting. She said that although she was hyper-sensitive to electromagnetic emissions, she deemed the meeting room to be safe.

“It was then noted that a wi-fi router was operating and was in the room,” he says.

Those who resigned from the committee say they are concerned about the reputation of Glastonbury.

Last month, Piers Corbyn – the brother of the former Labour leader – led an anti-lockdown protest in the town, where slogans against 5G were shouted.

Mr Swann says the atmosphere in the town has been tense lately and he is worried about the impact of the 5G report.

“This fallacious report severely damages Glastonbury’s credibility,” he says. “It undermines years of good work by well-meaning councillors and leaves a dark shadow over the town’s reputation.”

But Councillor Jon Cousins rejects the idea that the report may have served to encourage the conspiracy theorists.

“Glastonbury Town Council’s position and resolutions around 5G do not – and have never – suggested a link between 5G and Covid-19 or indeed that coronavirus is a hoax.”

He says the council worked closely with Avon and Somerset Police to deal with last month’s demonstration and breaches of social distancing legislation.