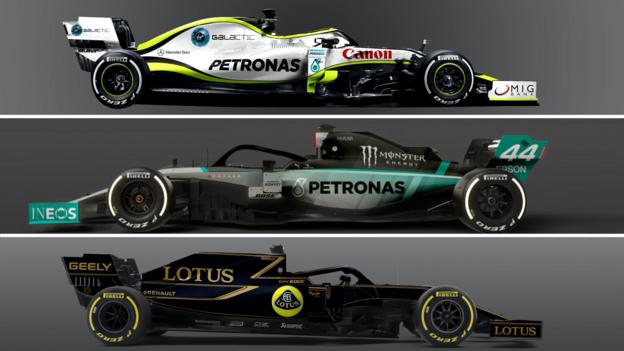 It’s that time of the year in the racing calendar when F1 fans get to see this year’s fresh batch of livery designs. We’ve rounded up each team’s new design here.

In the meantime, over on that there internet, a creative community of designers, unbound by corporate briefs and stakeholder input, are playing about with new, high-concept designs.

We chatted to a few designers whose hobby is to spend hours making these things that exist for their own sake only and not for any commercial gain – to say, “good job guys” but, also, to ask: “Why?”

Tim is a web design professional and massive motorsport fan. This is what this year’s liveries might have come out like, had he been let loose.

He says he’s “always trying to come up with new ideas that others haven’t tried or thought of”.

One of his ideas, back in 2018, was to create a host of liveries inspired by that year’s World Cup kits.

“The series did really well and was shared globally, including by F1 themselves on their social platforms,” he tells us.

Another idea he came up with was to design a set of liveries based on drivers’ helmets, including the likes of Nico Rosberg, Mark Webber, Fernando Alonso, plus classics including Ayrton Senna, Nigel Mansell and Mika Hakkinen.

“The designs were done to highlight the decreasing level of driver personalisation in Formula 1 and that it is possibly now harder than ever to identify individuals on track, especially for viewers trackside,” Tim explains.

Designer Sean is living his (and maybe your) best life. Two years ago, he got himself a job as part of the team designing liveries for the Renault Formula 1 team, having studied automotive design at university and gone on to work as an automotive car stylist.

He tells us joining Renault was “a bit like a footballer growing up to play for their boyhood club”.

He still makes livery designs as a hobby.

Some of his concepts play around with what 2021 liveries could look like, with a retro treatment.

“I started off just posting retro liveries on Instagram just over three years ago,” he tells us, “simply because I loved scouring Formula 1 books and the internet to find obscure and unique liveries, then using my Photoshop skills to re-apply them for the modern day.”

Other concepts include stuff like how Ford or other manufacturers’ cars could have looked as a 2020 Formula 1 livery.

“Concept liveries allow myself a way of expressing in the virtual world what I would love to achieve in the real one, but without any of the restrictions that come with it,” he tells us. “I know a lot of people seem to take issue at the feasibility of some of them, but to me it doesn’t matter as I can save all my feasibility for the real world.”

Adam is a graphic design student at the University of Cumbria.

His designs include his own suggestions for what a Lamborghini livery could look like in Formula 1.

Some of his other designs are fairly high concept.

He tells us the first idea he played about with was a livery inspired by Liverpool FC.

After making that first design, he tells us he started creating two or three a day.

“I went through secondary school wanting to be an F1 mechanic and worked in a garage from the age of 13-15 on Saturday mornings,” Adam tells us, adding that when he “fell out of love” with working on the tools, livery concept design allowed him another way to get back into cars.

Now then, if someone could just make these happen, that would be super.