Coronavirus: What is the UK’s test, track and trace strategy? 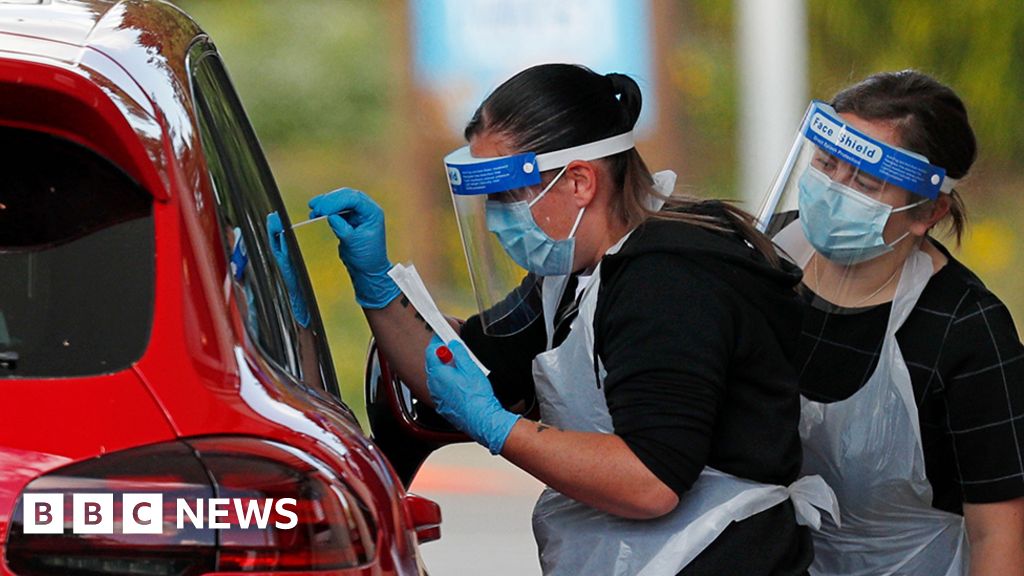 The UK’s “test, track and trace” strategy is being rolled out with the trial launch of a new app designed to alert people to possible exposure to coronavirus.

The NHS app will be made available on the Isle of Wight on Tuesday, Health Secretary Matt Hancock has announced, and all residents will be asked to download it.

Mr Hancock says the programme will allow the government to take a “more targeted” approach to the lockdown, while containing the virus.

Here’s a guide to the three parts of the strategy.

The first element – testing – has been scaled up over the last month, following Mr Hancock’s pledge to reach 100,000 tests per day by the end of April.

While that target was met last week – albeit by including testing kits being sent out by post – daily tests dropped back to 85,000 on Sunday.

For people not in hospital, tests can be booked online either by self-referral or by an employer.

Tests are done with a swab applied to the back of the throat.

Drive-through regional testing sites have been set up, and mobile testing units will operate from these regional sites in the near future.

Satellite testing centres will also be established at existing NHS sites where there is an urgent need.

Home testing kits are also available, although they are in limited supply at the moment.

A network of couriers will take the test swabs to laboratories for analysis. Three “mega-labs” have been set up in Glasgow, Milton Keynes and Cheshire, to boost capacity.

The results are sent back within 48 hours, or 72 hours for home tests.

To understand how coronavirus spreads through the population, 20,000 households will be recruited and routinely tested over 12 months.

The survey, which will eventually be expanded to include 300,000 participants, will also use “high accuracy” antibody tests to understand how much immunity is acquired by those recovering from the disease.

People taking part will be swab-tested and asked a short set of questions during a home visit by a health worker. The swab tests will show whether or not participants currently have the virus.

Tests will be repeated every week for the first five weeks, and then every month for 12 months.

The study will be run by the Department for Health and the Office for National Statistics, with advice from University of Oxford scientists and support from data science company IQVIA UK and the National Biosample Centre in Milton Keynes.

The NHS’ digital research division NHSX is developing a smartphone app which will alert people that they have been exposed to someone with coronavirus.

The app will use Bluetooth signals to log when smartphone owners are close to each other.

If an app user develops coronavirus symptoms, an alert can then be sent to other app users with whom they have been in close proximity.

“In the initial instance you would record (your own) symptoms, and people who have come into contact with you over the past few days would receive a notification,” epidemiologist Professor Christophe Fraser told the BBC on Sunday,

Professor Fraser, who is assisting with the app’s development, said the system would eventually be linked to testing, so people will be notified if they come into contact with a confirmed Covid-19 case.

The app could be particularly useful in stopping transmission by warning people who have been exposed to coronavirus cases, but not yet displaying symptoms, of the need to self-isolate, he added. The app could also be configured to send alerts to contacts of contacts.

The critical factor in determining the app’s success will be getting enough people to install it – however, use of other “interventions” such as manual contact tracing means it could succeed with a lower level of uptake, Professor Fraser said.

“If you, your friends, relatives and colleagues install the app, you have a group of people who are protected. For this intervention alone to control an epidemic, you would need about 60% of the population to download and adhere to it. On the other hand, we’re not proposing that this system should work alone … if this intervention is sitting alongside other methods, you would need a lower uptake. “

The app is to be trialled on the Isle of Wight this week.

While NHS-X says all shared data is anonymised, others have raised privacy concerns over the way the app “centralises” data collection.

The Information Commissioner’s Office has said that “as a general rule, a decentralised approach” would better follow its principle that organisations should minimise the amount of personal data they collect.

As part of this multi-intervention strategy, the government has said it will recruit 18,000 people for manual contact tracing by the middle of May.

A detailed picture will be built up of who that person has spent time in close proximity to, such as family members, colleagues or people they have travelled with.

A “close contact” is considered to be someone with whom they have spent a certain period of time, within a two-metre distance. Such a contact may be defined as “high risk” and asked to self-isolate.

People potentially exposed to the coronavirus are given advice on what to do if they become unwell or develop symptoms. Some are contacted daily until they can be given the all clear, usually after 14 days.

If a monitored person develops symptoms, they can be tested and given specialist treatment where needed.