Coronavirus: The grandad who became a TikTok star without realising it 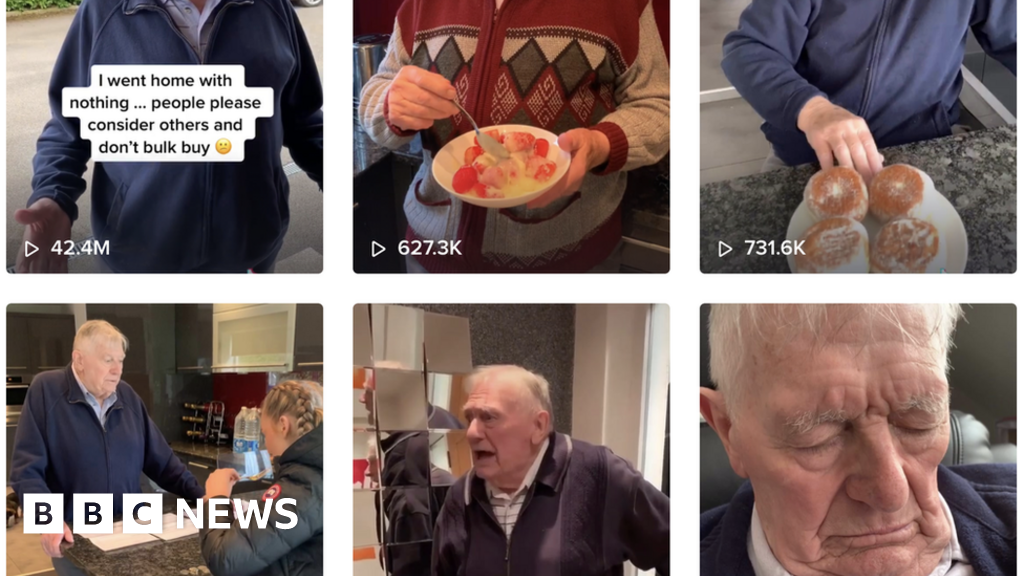 In less than three months an 87-year-old grandfather has gathered a huge following on the video-sharing app TikTok, despite the fact that most of its users are teenagers. And for a long time he was unaware of his growing fame, explains Chris Stokel-Walker.

The video summed up the exasperation many elderly members of society have felt. Joe Allington, from Lichfield, walked the aisles of his local supermarket, eyes agog at the empty shelves he saw before him.

He returned home downcast, with no shopping.

This was before the government introduced strict social distancing rules and Allington began self-isolating. He didn’t really need to go shopping as he’s been living with his daughter and her family for the last four-and-a-half years, but the 14-second-long performance hit a nerve and has now been viewed more than 42 million times on the shortform video sharing app, TikTok.

This is Allington’s biggest success since he started posting on TikTok three months ago as Poppa Joe. To his surprise, he’s picked up 1.5 million followers on a platform generally regarded as the preserve of teenagers.

Like many older people encountering smartphone apps for the first time, he has his granddaughter to thank.

“She was doing all these weird dances that kids do on TikTok, and trying to get me lipsyncing,” says Allington. He wasn’t interested at that point. It was only in January this year that he was finally persuaded to dance in a video.

Allington also featured in one of Brooke’s videos on 23 January. As she danced around him she directed her followers to his TikTok profile, asking them to get him up to 10,000 followers.

“I just don’t know why I’m popular,” he explains. “I’ve never been popular like that in my life.”

A petrol tanker driver for decades, after leaving school at the age of 14 in the late 1940s, Allington progressed to work in transport management. He retired at the age of 65, and became the family clown to his daughter, Wendy Paintain, 54, and his granddaughters.

When they suggested he join TikTok, it was a natural fit. “I’ve found my second childhood, you know,” he says.

He combines high drama and sadness with a quirky side, making light of serious situations. In one video, he dances to classic song Oops in front of a green-screened image of him lying in bed after a massive heart attack in 2019.

Another running theme of videos is his obsession with donuts – banned from his diet after his heart attack – and his attempts to eat them.

There are also occasional references to the pain of losing his wife, who died in 2009.

Allington claims he has little-to-no involvement in the videos he posts.

“Wendy coerced me into doing little bits of acting for the videos, which I did, and it’s taken off from there,” he says.

“I quite enjoy being made up, dressed up, and made a fool of. Wendy says: ‘Dad, we’re doing TikTok, we’re doing this today.’ Then I just do as I’m told. I’m very obedient, you know.”

He’ll have a go at anything except dance challenges, one of the key currencies of TikTok virality. “I’m not into waving my arms like that,” he explains. “I can’t do it!”

Because of his hands-off approach, Allington had no idea he was becoming an internet celebrity, so he was startled when Wendy told him he had more than one million followers.

“It’s really astounding to think there are so many people who know me as an old fool,” he says.

None of his friends know about his success, either. Until he was forced to self-isolate with his family, Allington went out for meals with them two or three times a week, and would take part in a local karaoke club every Saturday night. But they don’t belong to the TikTok generation.

Allington isn’t the only superannuated TikToker, though. There’s Grandad Frank, for example, a fleet-footed dancer who has more than 780,000 followers; and Granny Gone Wild, an American grandmother who combines comedy videos with speaking about being a survivor of domestic violence.

Now that he has got to know the app better, Allington is using it to connect with people he isn’t seeing during isolation, the nine-year-old daughter of the barman at his local club, for example, and his elder granddaughter, Sasha.

But he also uses “FaceTime and Houseparty and so on,” he says.

Many of Allington’s recent videos have been making light of the coronavirus-enforced quarantine.

One, seen 457,000 times, saw him don Marigold washing-up gloves, multiple bin bags and a mask covering only his nose for his government-mandated daily walk.

“It feeds well into the whole coronavirus situation we find ourselves in,” Armoo says.

“Grandad Joe is pretty much the perfect embodiment of it.”