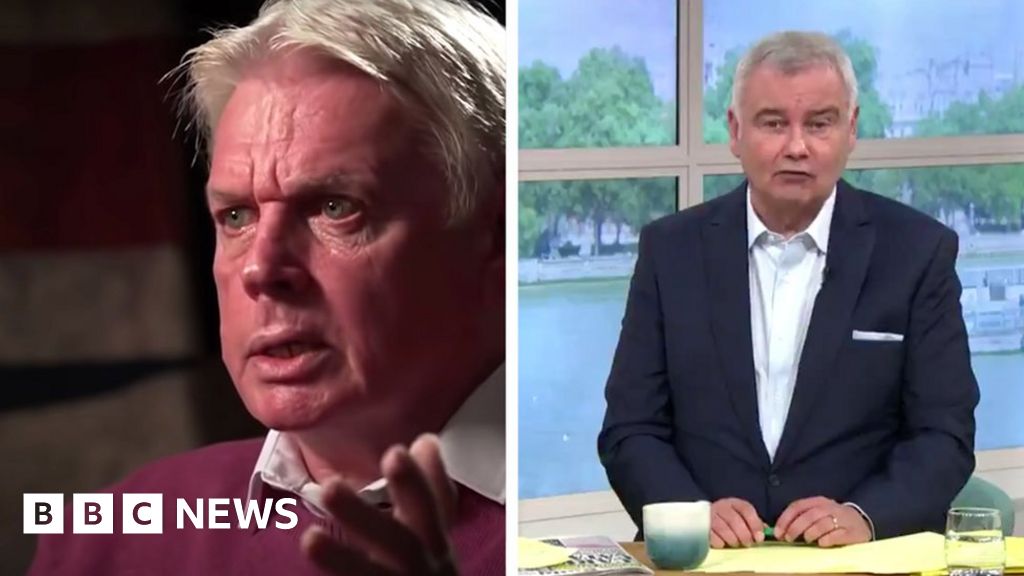 Broadcasting watchdog Ofcom has “issued guidance” to ITV following Eamonn Holmes’ comments about 5G technology and coronavirus on This Morning.

The regulator said Holmes’ remarks had been “ambiguous” and “ill-judged”.

The regulator also found local TV channel London Live in breach of standards for an interview it aired with David Icke about coronavirus.

Conspiracy theorist Icke, it said, had “expressed views which had the potential to cause significant harm to viewers in London during the pandemic”.

On 13 April, in a segment with This Morning’s consumer editor Alice Beer, Holmes cast doubt on media outlets that had debunked the myth that 5G causes coronavirus.

Beer, formerly a presenter on the BBC’s Watchdog programme, said the theory, which has led to phone masts being set alight or vandalised, was “not true and incredibly stupid”.

“I totally agree with everything you are saying,” said Holmes. “But what I don’t accept is mainstream media immediately slapping that down as not true when they don’t know it’s not true.

“No-one should attack or damage or do anything like that, but it’s very easy to say it is not true because it suits the state narrative,” he continued.

Holmes was widely criticised for his comments, which he said had been “misinterpreted” on the following day’s programme.

“For the avoidance of any doubt, I want to make it completely clear there’s no scientific evidence to substantiate any of those 5G theories,” he continued.

Ofcom said it had taken this on-air statement into account, along with the “context” Beer had provided, before deciding to issue guidance to ITV “and its presenters”.

“In our view, Eamonn Holmes’ ambiguous comments were ill-judged and risked undermining viewers’ trust in advice from public authorities and scientific evidence,” it said.

“His statements were also highly sensitive in view of the recent attacks on mobile phone masts in the UK, caused by conspiracy theories linking 5G technology and the virus.

“Broadcasters have editorial freedom to discuss and challenge the approach taken by public authorities to a serious public health crisis such as the coronavirus,” it continued.

“However, discussions about unproven claims and theories which could undermine viewers’ trust in official public health information must be put fully into context to ensure viewers are protected.”

It said the interview, recorded on 18 March and broadcast on London Live on 8 April, “included potentially harmful content about the coronavirus pandemic”.

While not mentioning 5G by name, Icke referred to an “electro-magnetic, technologically generated soup of radiation toxicity” that he claimed had damaged old people’s immune systems.

He also claimed that official health advice aimed at reducing the spread of the virus were being implemented to further the ambitions of a clandestine “cult”, rather than to protect public health.

Ofcom said it was “particularly concerned” by Icke “casting doubt on the motives behind official health advice to protect the public from the virus”.

“These claims went largely unchallenged during the 80-minute interview and were made without the support of any scientific or other evidence.”

The London Live programme was produced by a London-based independent company.

London Live is owned by the Russian businessman Evgeny Lebedev, who also owns the Evening Standard and Independent newspapers.

The channel will be required to broadcast a summary of Ofcom’s findings and may face additional sanctions from the media regulator.

Conspiracy theories linking 5G signals to the coronavirus pandemic continue to spread despite there being no evidence the mobile phone signals pose a health risk.

One falsely suggests 5G suppresses the immune system, the other falsely claims the virus is somehow using the network’s radio waves to communicate and pick victims, accelerating its spread.

While 5G uses different radio frequencies to its predecessors, it’s important to recognise that the waveband involved is still “non-ionising”, meaning it lacks enough energy to break apart chemical bonds in the DNA in our cells to cause damage.

Earlier this year, scientists at the International Commission on Non-Ionizing Radiation Protection completed a major study of related research into the topic.

While it recommended slightly tighter limits on the transmitting capabilities of handsets themselves to minimise any chance of damage caused by human tissue being heated, its key finding was that there was no evidence that either 5G networks or earlier systems could cause cancer or other kinds of illness.

The second theory appears to be based on the work of a Nobel Prize-winning biologist who suggested bacteria could generate radio waves.

But this remains a controversial idea and well outside mainstream scientific thought. In any case, Covid-19 is a virus rather than a bacteria.

There’s another major flaw with both these theories. Coronavirus is spreading in UK cities where 5G has yet to be deployed, and in countries like Japan and Iran that have yet to adopt the technology.