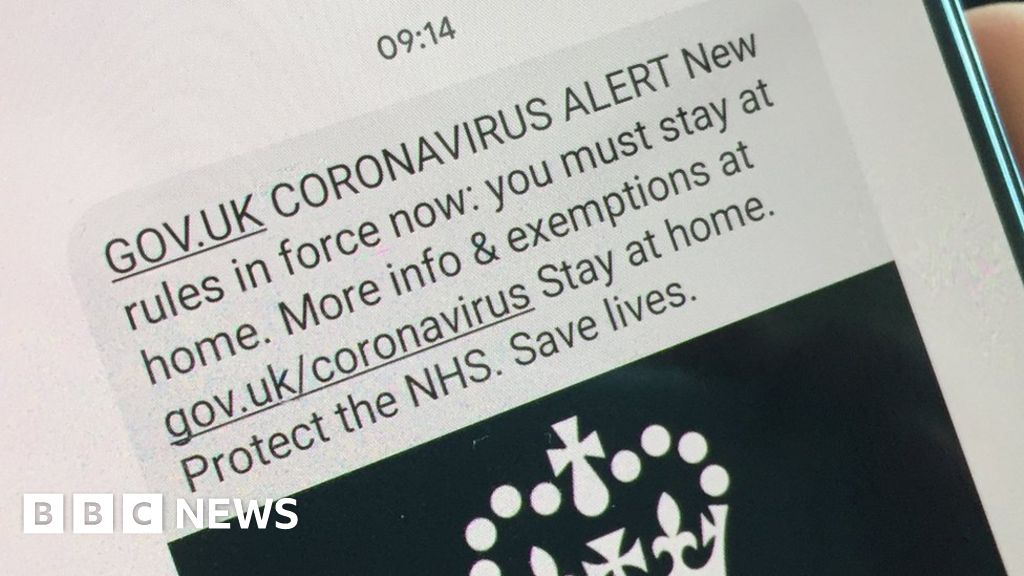 For the first time, all the UK’s mobile networks are sending out a government message to their customers with details of the new shutdown measures.

GOV.UK CORONAVIRUS ALERT. New rules in force now: you must stay at home. More info and exemptions at gov.uk/coronavirus Stay at home. Protect the NHS. Save lives.

Some customers have already received the message, while others are set to get it later in the day.

The government has had to work with the operators to get the message sent because an emergency alert system, trialled seven years ago, was never put into practice.

If it had been, the government could have bypassed the operators and sent messages directly to phone users, as has happened in countries such as South Korea and the Netherlands.

The texts had to be coordinated with the operators because a national alert system – which was trialled seven years ago – was never put into effect.

Such a service would have allowed the government to bypass the mobile networks and send messages directly to all of the UK’s mobile phones.

The trials run by the Cabinet Office in 2014 were apparently successful, with three mobile operators testing the broadcast of text messages in a defined area.

The final report on the trials said the idea had proved popular with focus groups and other members of the public surveyed about it.

It concluded that “the system would be an effective way of getting people to take specific protective action during an emergency”.

The report also suggested it would be possible to send alerts to the public within 15 minutes of making a decision.

It is not clear why the system was not then put into practice, although one operator told the BBC that cost might have been an issue.

While the link in the government text is safe to click, the public is being warned to be cautious about other unsolicited coronavirus messages they receive.

The UK’s National Cyber Security Centre has warned that criminals have ramped up bogus email campaigns that aim to trick users into clicking links that can lead to their computers being infected or seek to fool the recipients into divulging sensitive information.

It has cautioned that people should also be wary of opening attachments unless they know the sender.

Security firms have also warned that some scammers have sent out bogus SMS messages.

“These SMS spam attacks attempt to use the fear around the coronavirus worldwide emergency to try to push their targets to respond to the SMS spam, and so monetise (make money from) the attack,” wrote AdaptiveMobile Security on its blog.

The issue poses a challenge to the government if it intends to continue using text alerts as a means to communicate its advice.