Coronavirus: How Formula 1 drivers are keeping entertained during lockdown 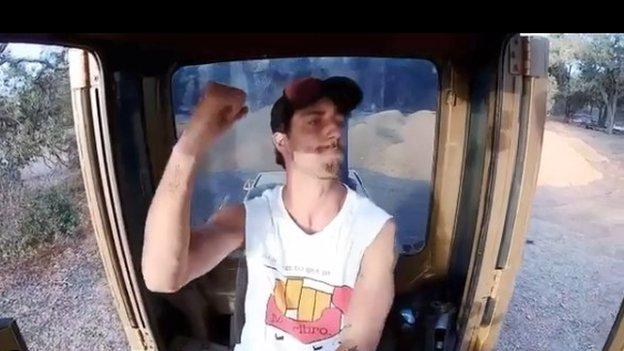 As Formula 1 is put on hold for the foreseeable future, keeping entertained at home has become top priority for the super-focused 2020 grid.

In a sport that travels the world for nine months of the year, sitting around at home and not going flat out around a famous circuit is a new concept altogether.

From a spot of reading to Arctic training in the middle of nowhere, here’s what a few F1 drivers have been up to during lockdown. Turns out they are quite different from one another, the F1 grid…

Down on the farm

You know whatever Renault’s Daniel Ricciardo will be up to will be funny.

Taking social distancing to new levels, he’s helping out on the family farm in the middle of nowhere, somewhere in Australia.

Having had no choice but to park up his usual Renault RS20 F1 car, the seven-time race winner jumped into the family’s tractor and spent plenty of his time in their.

It’s a solitary life in whichever cockpit you choose. But does he dance like this when he’s sizing up one of his legendary overtakes?

If you know your history

You can lose yourself in a good book, as the saying goes, which is exactly what George Russell is aiming to do with his time off.

The Williams man is a few pages deep into three-time world champion Niki Lauda’s autobiography, To Hell and Back.

Lauda wrote the book in the 1986 and it was published again in February following the Austrian driver’s death in 2019.

“I’m still getting through it but he’s an incredible guy, I’m enjoying it,” Russell told Sky Sports this week.

Move over Lando Norris, Charles Leclerc wants to take your title as the new king of esports kingdom Twitch.

Leclerc, like several other drivers during the lockdown, has joined the live streaming platform so fans can watch him take part in esports.

The Ferrari man even won the second ever Esports Virtual Grand Prix on his debut outing. So far, so good.

Where the Monegasque driver fails in his bid to topple Lando, however, is with the simple art of ending a stream.

After two failed attempts, Leclerc gave a quick call to IT (maybe) and now looks like a Twitching master with a sleek fade-to-black ending.

There have been lots of videos from sport stars teaching us how to keep fit and healthy while in lockdown.

F1 drivers are no different – but this routine by Lando Norris is probably one that should be left to the pros.

The 20-year-old showed fans his strenuous neck routine, a key part of any driver’s training regime, plus another glimpse of his freshly-shaved head.

Spotting Sebastian Vettel on social media is as rare as a snow leopard sighting in its natural habitat.

As the only driver who doesn’t have a Twitter or Instagram account, it was up to Ferrari’s official channel to coax the four-time world champion on to the platform.

No big revelations from this chat. Just good advice about staying at home and a nod to the fans for their thoughtful gifts.

Until next time, Seb.

While most drivers have retreated back to the F1 hotspot of Monaco, Valtteri Bottas has decided to go back home for a bit of social distancing.

Bottas and his girlfriend, Australian pro-cyclist Tiffany Cromwell, have headed to the far north of Finland where it’s cold, sparsely populated and as zen as you could hope for.

The pair managed to make it to the highest point in Finland, Halti, where – in normal circumstances – visitors can open the box and sign the guest book.