Coronavirus: How can we stay in virtual touch with older relatives? 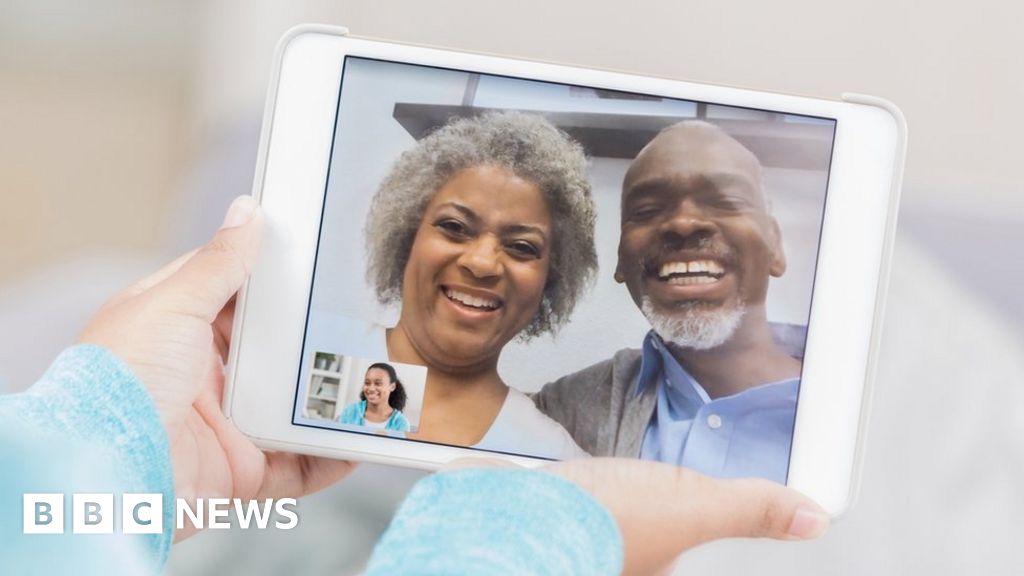 As the government encourages “social distancing” in the fight against coronavirus, older people are facing the prospect of being told to stay at home for weeks.

But what if a parent or older person in your life, doesn’t already have access to video calling tech?

“You might want to consider getting a specialised device to make video calls to your loved ones,” says Kate Bevan, editor of computing at Which?, the consumer magazine.

“Once they’re set up, they’re very simple to use but you do have to dig through settings in their apps to connect them and that’s not always as straightforward as it might be,” she says.

“Give yourself plenty of time to familiarise yourself with doing that so that you can help your relative through the process.”

Age UK, the charity for older people, adds that the choice of technology should be as “user-friendly as possible” for those unaccustomed to controlling video-chat software.

“Something integrated like a video call app on a smartphone, tablet or a laptop with a built-in camera, for example will often be more straightforward,” adds Caroline Abrahams, its charity director.

“Older people may also prefer physical interfaces like a mouse rather than a touchscreen or trackpad.

“To protect people’s privacy it will be important to ensure that any new devices are secure and not likely to be hacked, and that anyone using a new device has access to ongoing support to help them learn how to use it and deal with any issues or problems.”

Integrated kit can be the easiest solution – and could be hundreds of pounds cheaper than buying a laptop, tablet, or a mid-range smartphone.

Amazon, Google, and Facebook all have smart devices with screens for video calls.

Amazon’s Echo Show range are some of the easiest to use. The devices have a feature that lets you start a call without the other person even having to answer. Called “drop in”, it can automatically start the call if you set it up with the right permissions. It works with the Alexa app on smartphones, too, so only one person needs the special device.

Amazon also has some of the cheapest options, with the compact 5in model costing £50. It has a screen about the size of a smartphone’s but larger models are available. And it’s compatible with Skype, the veteran (and ubiquitous) video-calling app.

The Facebook Portal might be a better fit for some. One of its main selling points is the camera pans and zooms around the room, following the person you’re talking to. It starts at about £80, on special offer, for the photo-frame model.

It also integrates its video calls with Facebook-owned Whatsapp and the popular Facebook Messenger, so people who own a smartphone with those apps can easily call the Portal device.

Google’s Nest Hub Max sells itself on the fact it functions as a security camera.

Similar to Amazon’s “drop in”, family members with the right permissions can activate the security features and start watching the camera feed at any time. Some privacy-conscious people may not see that as a good thing. It costs £219. Be aware that a smaller Nest Hub model does not have a camera.

One problem with all these devices is their expense and another is their need to be on a stable, decent wi-fi connection at all times. Sometimes, a smartphone might be the better option.

“If your family member has a tablet or smartphone, you can also help them get set up with apps such as Skype, Facebook Messenger and WhatsApp, all of which do video calls,” Bevan says. “Apple users can also use FaceTime.”

Many of these apps are basically smartphone versions of the software on the smart displays – Google Duo, for example, is what Google’s Nest speakers use, while Messenger and Whatsapp integrate with Facebook’s Portal devices.

But a new smartphone, even a mid-range one, can be much more expensive. And Bevan warns against hand-me-downs past a certain age. Apart from lower camera quality, there can be security concerns.

“If you’re considering passing old Android smartphones and tablets on to a relative, do be careful that it’s still getting security updates,” she says.

“We recently found that there are more than a billion Android devices still in use that are at risk from malware and other threats.”