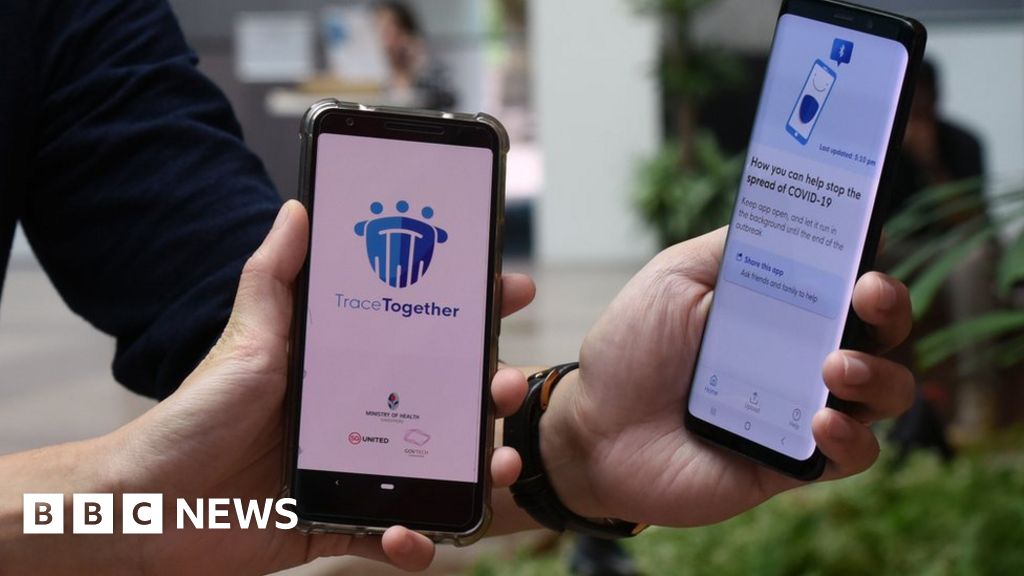 Coronavirus contact-tracing apps will be rolled out in Europe and Australia in the next two to four weeks, officials say.

Germany’s health minister Jens Spahn said his country’s app would be ready to download in three to four weeks.

Meanwhile, Australia plans to push out a contact-tracing app within two weeks.

Australian prime minister Scott Morrison said using the app would be voluntary to begin with – but he did not rule out making it compulsory.

Contact-tracing apps are being developed by several countries around the world.

They typically use Bluetooth or satellite location data to record who a person has been in close proximity to.

That information can then be used to notify app-users if someone they have met becomes ill with Covid-19, and declares their status in the app.

But such tracking technology has raised concerns that it could be misused for mass surveillance, given the large proportion of the population who must install it for it to work effectively.

Australia’s rapid development is partly down to basing it on an existing app called TraceTogether, which has already been deployed in Singapore.

He declined to say whether using the app would be made mandatory in the future.

“I will be calling on Australians to do it, frankly, as a matter of national service,” Mr Morrison told Triple M radio.

“If you download this app, you’ll be helping to save someone’s life.”

European Union member states such as Germany are being cautious about how they develop the tracking technology, after warnings from the EU executive that privacy and security regulations must be followed.

Doing so meant it would be “more like three to four weeks rather than two weeks” before the app was released.

Germany says using its app will be voluntary.

In Italy, development of a national contact-tracing app has been outsourced to Milan-based app-maker Bending Spoons. The plan is to test the tracing app in some regions before rolling it out nationwide, although no timeline has been set.

The start-up, which has made fitness, sleep and gaming apps, was chosen from hundreds of applicants.

It is also part of the Pan-European Privacy Preserving Proximity Tracing (PEPP-PT) initiative, which is attempting to create a system which will work across national borders while preserving as much privacy and security as possible. German officials have also backed the initiative.

The idea is that a person travelling from one European country to another would still be able to receive or trigger an alert, whichever national tracing app they are using.

The records, gathered by Bluetooth, would be stored in an anonymous, encrypted form, PEPP-PT said in a briefing earlier this month.

“Even if the data stored in the country data centres is subpoenaed or a hacker steals it, there is no way to trace back the patients or the contact people,” said Chris Boos, one of the project’s co-ordinators.

That is important due to the massive scale at which the app needs to be deployed to be most effective.

Singapore’s implementation of the TraceTogether app was reportedly adopted by only 10%-20% of the population.

Australian officials say that they will need at least 40% of people to use their app for it to be effective.

Other experts say that 60% of the population must install the app, and Britain’s experts advising the government say that equates to 80% of all smartphones in the country.

Concerns about the potential for abuse by national authorities and intelligence agencies have led to bodies like PEPP-PT backing an anonymised approach using Bluetooth.

In April, Apple and Google announced they were working together to create a platform that could be used by the various national apps.

Together, Android and iOS software powers a majority of smartphones on the planet.

Mr Boos of PEPP-PT said the collaboration seemed to be a good idea, although there were several points to discuss,

“Google and Apple are very open in these decisions, and there’s no point in getting up-in-arms,” he said. But the project opens up operating system functions like Bluetooth control, something he said “we very much appreciate”.

But he denied that the software giants’ collaboration replaced the Europe-wide initiative.

“Does it still need PEPP-PT? Yes, it does,” he said. “Google and Apple are supplying one little building block.”