Are female urinals the answer to queues at the loos? 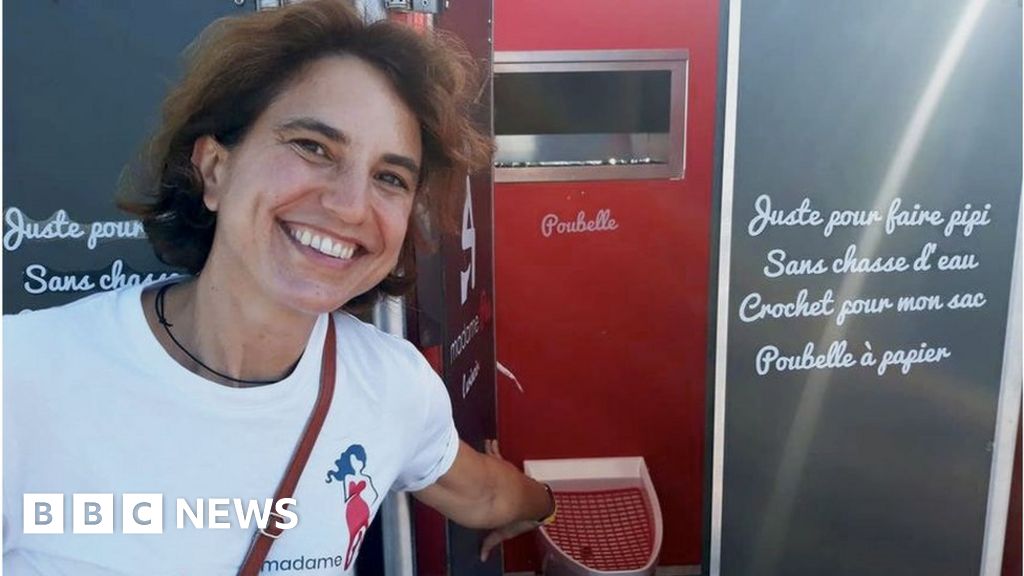 A few years ago, Nathalie Des Isnards was attending a music festival with her husband David, and planning to watch her favourite group.

Before the show, they headed to the toilets. “I spent 30 minutes in the queue waiting to pee,” she recalls. Much to her frustration, she missed the first part of the concert.

“I was upset. I told myself, ‘We’re in the 21st century, something should be done about that.'”

She set about creating a women’s urinal. The simple seatless basin she devised is housed in a cubicle with roof and door, designed for faster use but also privacy. “I was not a designer. I was a user first,” says the 46-year-old.

Despite innovations such as hers, women continue to face queues because, in Nathalie’s opinion, “Up to now, nobody has cared”.

However, thanks to social media, and growing competition between event organisers, she thinks the issue is getting more attention.

“[It] forces them to offer better services,” she explains. Also, organisers now realise, when women are queuing, they’re not spending money.

Des Isnards says 100,000 women used madamePee last year, at 15 events across France, including the Women’s World Cup. “It fits all women, not only young ones open to innovation.”

Two units have been also been installed in Paris as public amenities, she says. This year the loo will be in other several other countries.

“The ambition is very clear. It is to make it standard that each time you have urinals for men, you have a urinal for women,” says the French entrepreneur.

Even newer designs are aiming the trip to the loo even quicker.

The idea came to them while volunteering at the famous Roskilde music festival. “I couldn’t imagine going to a festival or a sport event without male urinals being everywhere,” says Mr Egebjerg, 29. “There’s absolutely no reason that women shouldn’t have urinals as well.”

According to their research, 90% of toilet queues are women needing only to urinate.

The team claim Lapee takes only 30 seconds to use, compared to one to two minutes for a regular cubicle. A 1,100 litre tank stores waste liquid underneath, allowing for about 3,500 visits. There are no doors, but the curved walls screen users from view, while encouraging quick use.

Getting women accustomed to urinals is one challenge, but Gina says women have welcomed their design. “We received a huge amount of posts on Instagram with very thankful messages,” she tells me.

Lapee debuted at three Danish music festivals last summer, including 48 units at Roskilde. They’ve been used since at marathons and other events in Denmark, Norway, Australia and France. Toulouse deployed them on city streets during the Rugby World Cup and over new year.

Ms Périer says Lapee is also targeting, “public spaces and any kind of gathering where toilets are pressured.”

The start-up has partnered with rental services firms to deploy Lapee in several European countries this year.

Other urinal products have launched with varying success.

Perhaps best-known, SheWee, has been on the market almost two decades. The funnel-shaped device enables women to pee standing up.

Sam Fountain says her invention was first greeted with a mix of scepticism and joy. While it isn’t mainstream, the British firm says it has sold millions worldwide to outdoor enthusiasts, international military, people with health conditions, and charities for refugee camps.

“The field of sanitation and toilets management is really under-prioritised,” says Christian Pagh. He and two other designers created a four-urinal toilet, called Pollee, in 2011. But after weighing up market size and manufacturing costs, they didn’t develop it further.

Gail Ramster, a senior researcher at the Royal College of Art’s Helen Hamlyn Centre for Design, is sceptical about female urinals.

“It’s quite a change in our habits to start using urinals,” she says. Factors like clothing and privacy could be issues for some women.

“Some people have used them at festivals and they have some success, but whether they can become widespread enough in those situations, or more extensively, I’m a little doubtful.”

Women typically take longer in the toilet because of biological, societal and practical factors, such as menstruation, childcare or different clothing. Often this isn’t addressed when toilets are planned.

“Men’s and women’s toilets are often built to the same square footage, but because you can fit more urinals in that space, men have more fixtures to use, usually, than women do.”

But the best option was to install gender-neutral cubicles, with optional urinals for men, which delivered even greater time savings for women.

“For the unisex scenario, there’s higher utilisation of your resources and inevitably leads to less waiting,” says Professor Wouter Rogiest, one of the study’s authors. “This [also] caters for the needs of transgender [people].”

It could be that the answer to those endless queues is not different women’s toilets, but simply more of them.