Afro Nation festival: ‘Where is my refund?’ 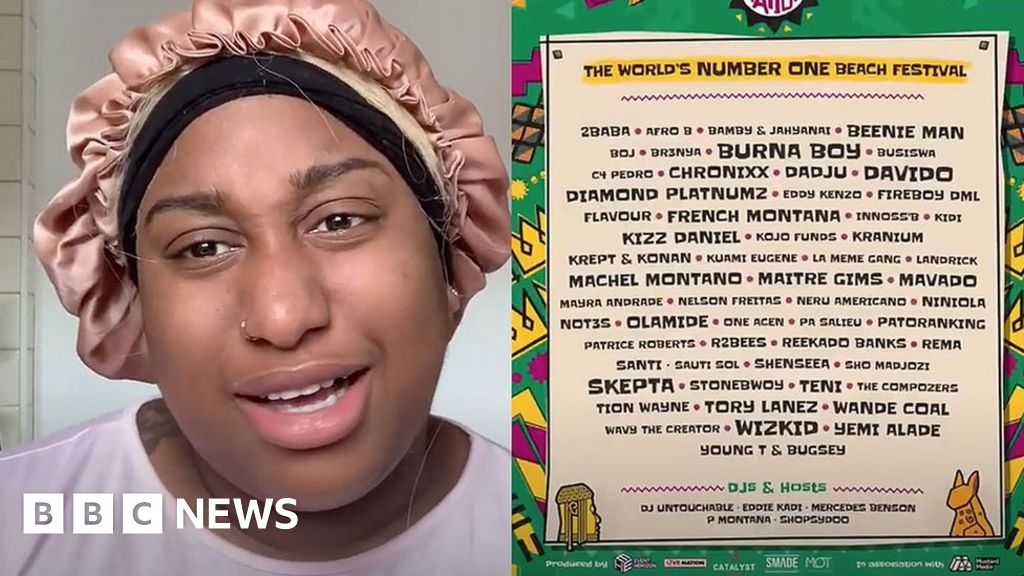 Like almost all 2020 festivals, Afro Nation Portugal was cancelled this year because of coronavirus – but unlike many others, it didn’t offer refunds.

Instead, tickets are valid for 2021, when it is hoped festivals will return.

But this has provoked an angry response from some ticket holders, also affected by coronavirus and in lockdown, who want their money back.

Harriet Sebastian, a 21-year-old YouTuber from Barking, is desperate for a refund.

‘I’ll fight for that refund’

Harriet’s ticket for the festival cost £216, and she paid even more for flights and hotel accommodation.

Afro Nation announced its plans to postpone until 2021 on 11 May.

Harriet tells BBC Radio 4’s Money Box programme she’s “absolutely frustrated” by Afro Nation’s policy and that the money from her refund would her help her current financial situation.

“The majority of us aren’t working because of the pandemic so anything will help,” she says.

“If all the people who are frustrated about this decision get together and complain then it will go somewhere”.

In a statement, the festival’s organiser said that they “will not be issuing refunds for Afro Nation 2020”, because of Portuguese emergency law DL 10I/2020.

This law, which was passed by the Portuguese government in March 2020, allows festival organisers to reschedule events without issuing refunds.

But Afro Nation is a UK registered company and therefore shouldn’t be subject to Portuguese law.

The licensed promoter of Afro Nation Portugal is a company called known as MOT-Braver.

MOT-Braver is registered and based in Portugal, and any events it produces – including Afro Nation – are subject to Portuguese law

Most people don’t read terms and conditions when purchasing a ticket, but Afro Nation’s no-refund policy has prompted several posts on social media about what’s written in its small print.

On the Afro Nation website, Ticket Arena is listed as one of the main ticket sellers for the festival.

In Ticket Arena’s terms and conditions, which they state are “governed by English law”,  Ticket Arena writes that: “If an event is cancelled we will refund you the full face value”

This gives the impression that if the event is cancelled ticket holders are entitled to a refund, right?

Sadly not. There’s another clause in Ticket Arena’s own terms and conditions that the decision to issue refunds ultimately comes down to the events promoter – and that’s MOT-Braver.

So what Afro Nation is doing is technically still legal by Portuguese law, which is what it operates under.

‘Not authorised to refund’

But there is a UK law, under the Consumer Rights Act 2020, that says terms should be transparent, simple to understand and should take into account a “consumer’s legitimate interests”.

Gary Rycroft, partner at Joseph A. Jones solicitors, tells the BBC that “knowing who the promoter actually is, is within the consumer’s legitimate interests.”

“It could be argued that Ticket Arena’s terms are misleading and unfair because they don’t disclose who the promoter of the festival is or their terms.”

Ticket Arena is also a member of Star (Society of ticket agents and retailers), a self-regulatory body for UK ticket vendors.

The Star code of practice says its members must make sure customers are “openly told of all the terms and conditions that apply to customers”.

Despite these rules, Ticket Arena does not make customers aware of the terms and conditions of the promoter for the Afro Nation Portugal festival.

“The promoter has not authorised ticket agents to give refunds,” it tells the BBC in a statement, adding it is “as disappointed as our customers with the current situation but we are actually doing what we can to help”.

So, can you get your money back?

All tickets for Afro Nation Portugal have been automatically transferred to 2021, and there is currently no option for a refund

Ticket holders who want their money back can get it back through the Small Claims Court. You will need to provide a statement laying out what you are claiming for, the amount owed and why you are making a claim.

Claims can be made through Money Claim Online. and you can find out more about your rights on the BBC’s Money Box.